Clarence Linden Hutchins: A Confederate Cadet in the Care of His Brother

By S. Lincecum 03 August
Clarence Linden Hutchins was born 21 January 1844 in Georgia to Nathan L. Hutchins and Mary D. Holt. He died 8 March 1917 in Spartanburg, South Carolina. The tombstone placed for him in Lawrenceville's Historic Cemetery at Gwinnett County, GA states he was "A noble soldier." 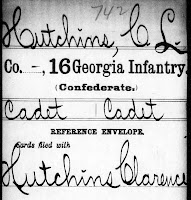 In viewing the compiled service record for C. L. Hutchins online at Fold3, we learn that he was an officer in training -- a cadet -- from the start of the war. Page two of his service record states he "Appears on a Register of Appointments, Confederate States Army." He was appointed from Georgia 30 August 1861 and delivered to the Honorable Howell Cobb and the 16th Regiment, Georgia Infantry. Some time after Clarence appeared on a regimental return for the same organization in February 1862, we find him with the 3rd Battalion, Georgia Sharpshooters. He "Appears on a report of Staff Officers on duty in Wofford's Brigade."

Next we learn about C. L. Hutchins, the Prisoner of War. He "Appears on a register of Prisoners of War at Old Capitol Prison, Washington, D.C." He was captured 6 April 1865 at Sailor's Creek, Virginia, then sent to Johnson's Island, Ohio 17 April. After a couple of months, Clarence signed an Oath of Allegiance to the U. S. and was released. Here is one of only a couple of places where we find a rank other than "cadet" for Clarence. He was listed as "2 Lieut, C. S. Army." Also included was a bit more information: his place of residence was Lawrenceville, GA; he was 21 years of age; his complexion was "florid" [highly colored, red, flushed]; his hair was dark; his eyes were hazel; and his height was 5' 6".

Some other items in his service record consist of pay vouchers and clothing requests (1 pair of shoes and 3 pairs of socks). He was paid an officer's wage of $80 a month, but his clothing requests state the following: "I certify the above requisition is correct, and that the articles specified are absolutely requisite for the public service, rendered so by the following circumstances: Cannot otherwise supply my self." Each of these documents was signed by Clarence Hutchins. 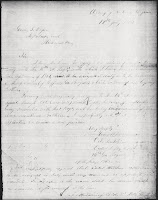 I get the sense that during the Civil War, Clarence had a "desk job" (if there was such a thing). That's not to minimize any danger he faced, or that things he saw no young man should ever have to see, of course. One of the last pages of his service record is a letter. In it, we find that Clarence actually requested to be transferred to the 3rd Battalion, Georgia Sharpshooters. Why? Read on:

Sir:
I have the honor to apply to be relieved from further duty with the 16th Ga Regt, with which I have been serving since September of 1861, and to be assigned to duty with the Battalion of Sharp Shooters, (of Wofford's Ga Brigade) which is commanded by my brother.

Having been originally assigned to the 16th Ga Regt __?__ request, through Col. (now Gen'l) Howell Cobb, because of my brother being connected with that regt, and he being in command of the above mentioned battalion, I respectfully ask that my application be considered and granted.

19th July, 1863
I respectfully request that Cadet Hutchins' application to be assigned to duty with my command be approved and granted. In addition to the reasons stated, his service would be valuable to the command at this time.

Nathan L. Hutchins, Jr. was the second oldest son of N. L. Hutchins, Sr. and Mary D. Holt. He was about ten years older than Clarence, and in my opinion, his caretaker during the Civil War. What do you think?