His Exit was Calm and Peaceful 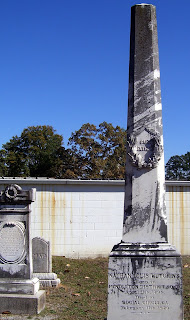 City and Suburban Affairs
DEATH OF NATHAN L. HUTCHINS. -- We regret to learn that Judge Nathan L. Hutchins died at Social Circle last night at eleven o'clock. His exit was calm and peaceful. Full of years and honors at the age of seventy-one years, Judge Hutchins fell asleep, leaving the memory of a well spent life behind. He was loved by the people of Gwinnett and adjacent counties as a father, and his death will carry sadness into many a family circle. - Atlanta Constitution (Georgia), 12 February 1870

According to his obelisk tombstone in Lawrenceville Historic Cemetery at Gwinnett County, GA, Nathan Louis Hutchins was born 11 April 1799 in Pendleton District, South Carolina. A sketch in Memoirs of Georgia (Southern Historical Press, 1895) states he was "a very prominent lawyer in his day...His father was without means, and the greater part of his education was acquired by studying at night by the flickering light of a pine knot." His profession as a lawyer was from March 1822 to July 1857. Then he was elected Judge of the western circuit of Georgia. The same sketch also describes Nathan Louis Hutchins as "a man of extraordinary nerve and of unflinching courage, and one of the most affable and kindly disposed."

Nathan Hutchins married Mary Dixon Holt in 1829. Thus far, I have found ten children attributed to them. Five of their sons took part as officers and/or soldiers in the Confederate Army during the Civil War. Nathan described their service in his Application for Presidential Pardon, dated 1865:


I had five sons all subject to military duty but one The four joined companies one in Columbus Ga one in Milton - one in Cobb & the other in this [Gwinnett] county - The minor left school & went to Virginia I had him withdrawn & returned home. - he afterward again went off to join the army was again sent back by his older brother soon after that in July 1863 he became subject to conscription and was beyond my control - one of the five was killed two badly wounded - the health of one broken down - but the four survivors who I am told were good officers & soldiers have returned all now as loyal to the union & constitution of the U.S. as any of your citizens - prepared to fight as hard & endure as long for the union... 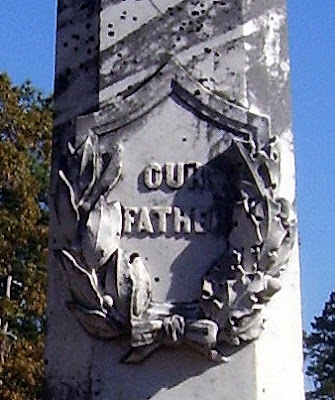 Lewis Powell IV said…
I really love that you do so much genealogical research! Keep up the good work!
August 24, 2011 at 1:57 PM