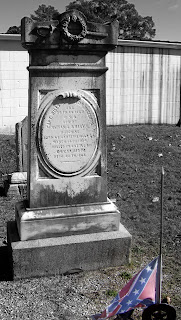 Capt. W. N. Hutchins
"The painful rumor of the last two days has been confirmed, and Columbus has to mourn the death of the above named most estimable citizen and gallant and meritorious officer.

He was the oldest son of Hon. N. L. Hutchins, Judge of the Superior Courts of the Western Circuit, and nephew and law partner of Col. Hines Holt, of this city. At the commencement of our struggle, he held the position of Assistant Secretary in the Provisional Congress -- which would have exempted him from military service.

But he felt that his country needed his services in the more active duties of the field, and at once surrendered all else in obedience to this sense of duty and of patriotism. Though of frail and feeble constitution, no man has been more continuously at his post, and no more gallant spirit has been offered up on the altar of his country. 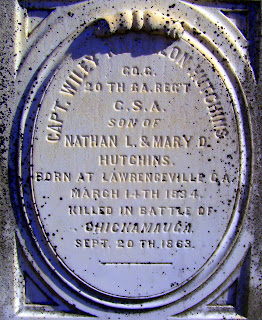 Capt. Wiley Napoleon Hutchins of Company G, 20th GA Regiment, Confederate States Army, was killed at the Battle of Chickamauga 20 September 1863. He was born at Lawrenceville, GA 14 March 1834 to Nathan L. and Mary D. Hutchins. Wiley was a brother to Clarence Linden Hutchins, John Mitford and Polk Francisco Hutchins, and Harriet Hutchins. The back of his tombstone reads as follows:


As Son, Brother, Friend, Lawyer, and Soldier
He was dutiful, affectionate, generous, faithful, and gallant.
The tenderest are the braves.
The noble are the daring.