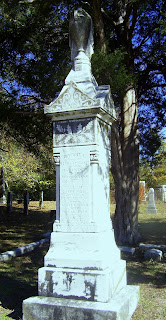 Strickland was a young man about thirty years old. He formerly lived at Rome, where, about four years ago, he struck Major Sam Morgan, a prominent cotton merchant, on the head with a piece of scantling, causing him to become insane. Subsequently, Strickland spent most of his time here with his father and brothers. He was unmarried...

[The details of the incident take up at least two columns in the newspaper. Liquor, threats, and the resisting of arrest are major components.]

...Strickland's remains will be taken to Lawrenceville to morrow, for interment.

When the Grave was Reached, One of the Largest Crowds had Gathered to Witness the Closing Ceremonies

The following week, the "sensation" was still high. Again, from The Weekly Constitution:


Tuesday, July 27, 1886 edition -
FOR KILLING STRICKLAND
Sunday's Sensation Still the Topic in Cartersville.
CARTERSVILLE, Ga., July 22 -- The excitement over the killing of Bryant Strickland still runs high. It is said that every one connected with the killing will be vigorously prosecuted. The defense is preparing to make a stubborn fight...

[Meanwhile, back at Lawrenceville] The remains of Bryant Strickland, who was killed at Cartersville last Sunday, were interred in the cemetery at this place. All the family of the deceased were present, together with Rev. Hines Strickland, of Tennessee, and Rev. Mr. Dodge. The procession started from Mr. Tom Jacobs' at 10 o'clock, and when the grave was reached one of the largest crowds had gathered to witness the closing ceremonies ever seen there. It was due to the extensive friendly relationship of the parents of the deceased, who for a long time lived at this place, and to the acquaintances of the deceased who knew him as a brave, noble, generous hearted soul. He had his faults, but his virtues were many of the highest type. He was loved here as a boy in his boyhood days, and his untimely death has provoked hundreds of the kindest expressions for his early unfortunate ending, and the sympathy for his parents is deep, sincere and universal.

Though the prosecution seemed dogged, due to the prominence of the family as a whole (in my opinion), another newspaper, -- The Macon Telegraph (Georgia) -- tells us Puckett was acquitted of any crime a few months later.