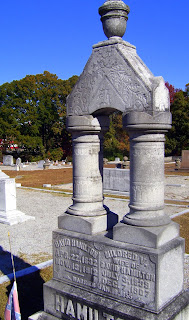 In May of 1862, David enlisted as a Private with Company I of the 16th Georgia Regiment. On 19 October 1864 in Virginia, likely during the Battle of Cedar Creek, David was wounded and as a result lost a finger. He received a pension for his service and loss: $5.00 a year.


The American Battlefield Protection Program describes the Battle of Cedar Creek, VA (also known as Belle Grove): "At dawn, October 19, 1864, the Confederate Army of the Valley under Lt. Gen. Jubal A. Early surprised the Federal army at Cedar Creek and routed the VIII and XIX Army Corps. Commander Maj. Gen. Philip Sheridan arrived from Winchester to rally his troops, and, in the afternoon, launched a crushing counterattack, which recovered the battlefield. Sheridan’s victory at Cedar Creek broke the back of the Confederate army in the Shenandoah Valley. Lincoln rode the momentum of Sheridan’s victories in the Valley and Sherman’s successes in Georgia to re-election."

Census records suggest David Hamilton was engaged in farming the rest of his days. He died 13 November 1912.