From England to Georgia: a Short Sketch of Snellville's James Sawyer

By S. Lincecum 17 November
James Sawyer was born in England 30 January 1857. He immigrated to the United States around age 17 and settled in Snellville, Gwinnett County, Georgia. For the 1880 census, James was a merchant boarding with Joseph T. Snell (also a merchant). James became a naturalized citizen of the United States about 1884. Around that same time he married Emma A., whose full name (according to online family trees) was Emma Alice Webb. The 1890 property tax digest and the 1900, 1910, and 1920 census records show Emma and James stayed in Snellville and raised six children. James was consistently a retail merchant, his wares being specifically dry goods and groceries in 1920. Emma, born 6 September 1866, died in Gwinnett County 21 June 1929. James lived almost another nineteen years and passed away 1 May 1948.

Emma and James' gravesite is a wonderful, "homemade looking" rock vault in Snellville Historical Cemetery. It is adorned with light colored rocks that spell out the SAWYER name above the marble "door" on the front and form crosses on the back and sides. Even though the structure might have been built a relatively short time ago, it has a fantastic old southern folk cemetery feel. 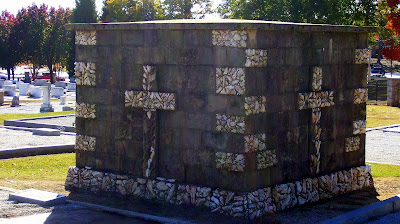