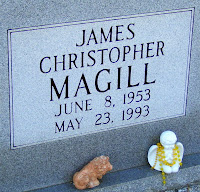 According to his FindAGrave memorial created by Sally Jones, "Officer Chris Magill was killed when he was struck by a drunk driver. The accident occurred while he was waiting in his cruiser for a tow truck to tow the car of a previous drunk driver. End of Watch: Sunday, May 23, 1993. Officer Magill had served with the Gwinnett County Police Department for 10 years." Losing his life in the line of duty was alluded to in the epitaph on the back of his tombstone:


The last few lines of James' epitaph is from the Bible, John 15:13. Mr. Magill rests at Snellville Historical Cemetery in Gwinnett County, Georgia.