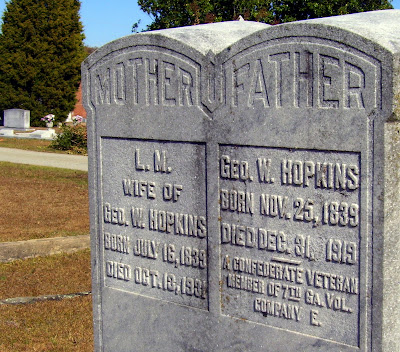 George Wiley Hopkins, a Confederate veteran of Company E, 7th Georgia Volunteers, was born 25 November 1839 to George Hopkins and Elizabeth Turner. According to his death certificate, George committed "suicide (pistol shot)" just over 80 years later on 31 December 1919. When I read this, I was a little surprised at the feeling of sadness that came over me. It was a bit stronger than basic human compassion. I wonder what caused George to take such a drastic measure. Given his age, was he terminally ill? I don't know the details, but I sure am curious.

Louisa (1839-1931), George's wife, lived without him for about a dozen years. They rest side by side in Shadowlawn Cemetery at Lawrenceville, Gwinnett County, Georgia.