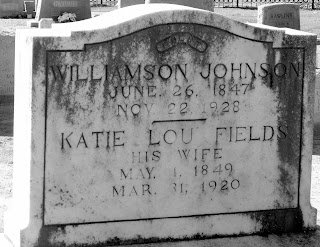 When I found Williamson Johnson in the 1910 Gwinnett County, Georgia Federal census with his wife Katie Lou, I noticed the entry states Katie had 13 children. All of the children were listed as living, too, which is such a rarity. Though only five were listed in the household at that time, I decided to try and find all the children using only census records.

rhonda ermlich said…
these are my great great grandparents, my greatgrandmother ara johnson boozer born 5/25/1884,, stumbled across this today and love your blog
January 20, 2021 at 7:51 PM