A Confederate Soldier with a Recessed Shield? (Or, the Tombstone of James M. Wiley.) 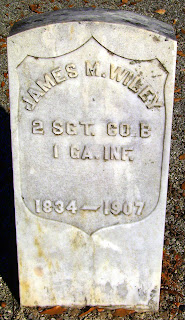 In a cemetery, it's usually easy to tell with a glance which side a soldier served during the Civil War. Union soldiers have a recessed shield with raised lettering, and Confederate soldiers have a Southern Cross of Honor etched above their names. The U.S. Department of Veterans Affairs states it this way:

So I was a little surprised to see the stone pictured above. Based on his unit and location, it would appear that James Wiley had been a Confederate soldier. Yet his final resting place bears a military headstone and design usually reserved for those that served the Union.

In an attempt to be sure this Mr. Wiley was indeed a Confederate soldier, I did a bit of research. According to Civil War databases on Ancestry and Fold3, there was a James M. Wiley that served as a 2 Sgt in Company B of the 1st (Ramsey's) GA Infantry. This soldier enlisted March 1861 and was discharged with a surgeon's certificate of disability five months later. Less than a month following the release, James M. Wiley enlisted in Company H of the 11th GA Infantry. Though it likely goes without saying, both of these units were part of the Confederate States Army.

It seems James M. Wiley, a Confederate veteran, received a Union-styled tombstone. Or did he? Could it be possible this stone is not a true military issue? The birth and death years being inside the shield does seem to contradict the "official" style of the Union stone. The question can also be raised as to when the stone was placed. I suppose whoever chose it might have liked the recessed shield design better. Or is it simply a mistake? What are your thoughts?

Dorene from Ohio said…
I do not know the final answer as to whether James M. Wiley served with the Confederacy or the Union, but I have seen hundreds of stones like this here in northern Ohio, where many Union soldiers and sailors have been laid to rest!

Suzie Henderson said…
IMHO...I think it is a non-government issue stone. Perhaps someone didn't know the government would supply a marker for Johnny Reb and had their own made. The shield on this stone appears more elongated than the one shown in the sample linked by Dorene in her comment.

I just don't think the government would mistakenly put the dates inside the shield after making thousands all alike.

steve mashburn said…
There was a Union regiment raised in north Georgia called the 1st GA - my Ling ancestors belonged to it. I wonder if your man belonged to it also or if someone just assumed he was in the Union unit.
December 1, 2013 at 8:11 PM

Anonymous said…
Interesting post. I just blogged something similar about the headstone of my own great great grandfather. Apparently someone decided to replace his original stone with a 2nd one which added a Masonic symbol, floral motifs, an inscription "Forever with the Lord" and a recessed shield. Its known beyond any shadow of doubt that he was indeed a Confederate soldier. So it remains a mystery as to why the 2nd stone was placed and why the shield was placed there as a military symbol, or instead somewhat religious as in strength, courage, protection, faith.

Another consideration for non government issued headstones as ordered by family members is whether they may have been place during militarily enforced Reconstruction times. Perhaps the Union form of the military shield was the only one available during that time?