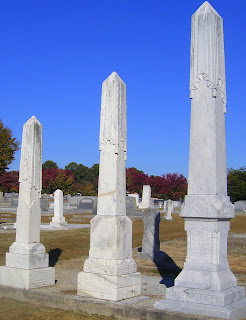 The obelisk has its roots in Egyptian architecture and culture, representing a ray of sunlight. The drapery provides the added sentiment of mourning, the death shroud, or the thin veil between Heaven and earth. Warren F. Brownlee (1867-1913, far right in photo) is memorialized as a kind and affectionate brother, and a friend to all. No mention of being a husband or father. Census records show him being occupied as a salesman often, from insurance to furniture. The 19 January 1913 Atlanta Constitution (Georgia) shares notice of his death:

Warren F. Brownlee.
The body of Warren F. Brownlee aged 45, of the Campbell-Brownlee Furniture company, who died Friday at his home near Poplar Springs, will be taken this morning to Snellville, Ga., for interment. A special coach has been arranged to carry the Masonic and Odd Fellow escort which will attend the funeral services.

This Brownlee family plot is in Snellville Historical Cemetery at Gwinnett County, GA. Resting next to Warren is his father George (1829-1899, center in top photo).

Anonymous said…
That's really interesting. Thanks for posting all the great information! Had never thought of it all that way before.
December 10, 2011 at 11:33 PM

Jasmine said…
Stones can be very expensive now a days even for grave stones or manor stones or any kind of stones for houses, although stones are very essentials to our house, home or grave yard we tend to look for the cheapest one around. One of the best wway to search for stones is on the internet.