He Died for the Cause He Thought was Right

By S. Lincecum 05 April
The Civil War Battle of Allatoona Pass in Bartow County, Georgia was fought in October 1864. I visited this battlefield last year and was amazed at how little seemingly had changed in the almost 150 years since the fighting. Visible still were earthworks, trenches, wagon roads, and the massive deep cut through which the railroad once passed. I posted a bit of information and photos at the Peachy Past blog.

The casualties from the war, including both sides, numbered over 1,500 dead. Several soldiers were buried where they fell, unknown to this day. One marker in front of the 1838 Clayton-Mooney House memorializes 21 unknown Confederates. For many years, one solitary grave was marked in the deep cut as an unknown hero. 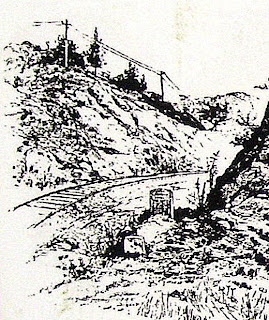 The Western & Atlantic Railroad employees maintained the grave for quite some time. And Georgia Governor Joseph M. Brown, who supposedly often visited the Allatoona Pass, was inspired to write a poem about the unknown soldier. Here are the first and last verses of "The Soldier's Grave":

In the railroad cut there's a lonely grave
Which the trackmen hold sacred to care;
They have piled round it stones, and for it they save
Every flower, when their task calls them there.

Heav'n pity the dear ones who prayed his return.
Heav'n bless them, and shield them from woes,
Heav'n grant o'er his grave to melt anger stern,
And make brothers of those who were foes!

According to the informational marker by Georgia State Parks & Historic Sites, local historians believe that the burial is Private Andrew Jackson Houston of Mississippi, who died at the Allatoona Pass during that October 1864 battle. He was buried where he fell.

The marker adds, "Forgotten to time for several years, in 1880 this site was marked with an iron fence and a marble headstone inscribed 'AN UNKNOWN HERO, He died for the Cause He thought was right.' Railroad employees maintained the grave for many years and later moved the grave to its present site when the rail line was relocated." A photo is included with this individual's FindAGrave memorial.

Of course, there is more than one theory as to the identity of this unknown soldier. A couple more are detailed at Explore Southern History.