The Lion of Atlanta

"The monument to the 'Unknown Confederate Dead' marks the final resting place of approximately 3,000 unknown Confederate soldiers who died during the Atlanta campaign in 1864. In 1869, the Atlanta Ladies Memorial Association had the 'battlefield dead' soldiers that had been buried in hastily-dug trenches near the battlefields brought to Oakland [cemetery] and independently reinterred in the square guarded by the Lion of Atlanta... 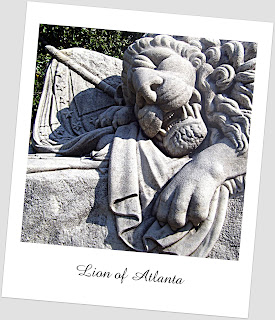 ...The Lion is carved from marble supplied by the Georgia Marble Company of Tate, Georgia. The monument weighs 30,000 pounds and was carved from the largest block of marble ever quarried in America until that time (1894)...

The figure represents a lion that has received its death wound, and in his agony he is grasping and attempting to draw towards him the battle flag of the Confederacy."1 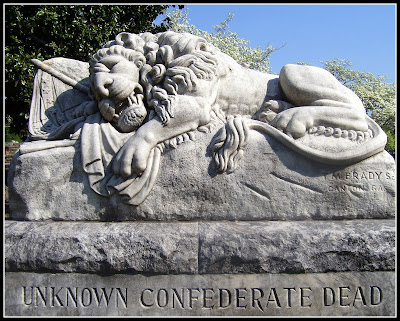 The sculptor was T. M. Brady of Canton, Georgia. He was inspired by a suggestion that the monument emulate the Lion of Lucerne. In tombstone symbolism, the lion represents courage, majesty, and strength.

Unknown said…
This is one of the most beautiful sights in Oakland Cemetery, This is my most favorite place in Atlanta. So peaceful, beautiful and sometimes the most lively place in Atlanta, during events. Come on down and visit.
October 29, 2013 at 9:53 PM