Simply a Cross Pattée, Maltese, or Not a Cross at All? (A Symbolic Tombstone Tuesday)

By S. Lincecum 22 May
I wanted to post this a few days ago, but sometimes life gets in the way!

I didn't pay much attention to this symbolic design on the monument for William Rawson (1861-1902) while visiting at Oakland Cemetery in Atlanta, Georgia. It jumped out at me once I got home and was reviewing the photos I had taken. Since I didn't get a close-up shot at the cemetery, here's a cropped view from the original photo. 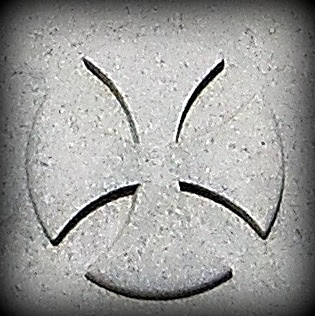 The image was familiar to me as a cross, yet I was unsure of what to call it. I conducted a bit of research, and think I got a bit of information overload. My first significant result was from Wikipedia describing the cross pattée as "a type of cross which has arms narrow at the centre, and broader at the perimeter." These were variants pictured:


William's cross resembles greatly the third from the left -- "With the ends of the arms convex and curved; sometimes called 'Alisee'". The cross pattée in its variant forms was sometimes used by the Crusaders, and this is where my familiarity began and ended. In connection with the Knights Templar, Wikipedia had this to say:


The Templars did adopt a red cross on their white robes in 1147, but there was no specific style designated, and different Templars used different versions of the cross. The cross pattée was by no means their official symbol. However, some modern Freemason organizations do use the cross pattée in an official way, and this use occasionally causes confusion as to which version was used by the medieval order of Knights Templar.

As I kept researching, I came across references to the Maltese Cross that included the "Alisee Pattée". But I think a main signature of the Maltese Cross is more defined points. Douglas Keister described it in Stories in Stone:


The Maltese cross looks like a + sign with flared ends that are usually indented to form eight points. These eight points represent the Beatitudes. It is often associated with such fraternal orders as the Knights Templar.

Lastly, I saw mention of St. George's Cross (pictured at right). This is a red cross on a white background, also with ties to the Crusades. Supposedly, in Sweden and Scandinavia, the definition of a St. George's Cross is widened to include a "centred cross, normally red but not necessarily, with triangular arms that do not fill the square. Internationally this is often referred to as a subgroup of Cross pattée..."

After all this, I'm inclined to consider the symbolic design on William Rawson's monument as a simple Cross Pattée. Unfortunately, more research would have to be done on Mr. Rawson to know if there is any real connection between his life story and the cross depicted.

I suppose it's possible the design is not a cross at all. What do you think? Would you call the design a cross? What kind?