By S. Lincecum 04 June
[The following was originally posted at the Rose Hill Cemetery blog. I wanted to highlight it here because of the interesting mosaic tile work on the ledger marker. The deceased, Ella English Cameriero, married into an Italian family in the 1800s. I tried to find out if this type of adornment was common in the Italian cemetery culture, but have yet to find a definitive answer. I did find this mention regarding the Italian Club cemetery in Ybor City, Florida.]

Hmmm... I wonder what happened here.


In Need of Help.
A sad case of need can be found by the charitably inclined this morning at No. 355 Fourth street.

Mrs. N. Cameriero, formerly Miss Ella English of Marshallville, who was deserted by her husband several days ago is in destitute circumstances and in need of work.

Competent to do all kind of needle work, she finds herself unable to maintain herself for want of employment. The ladies of the city are appealed to in this matter. [Macon Telegraph, Georgia, 28 November 1888]

The above notice was published less than a year after Ella and Nicholas were married, as they were united in matrimony 28 December 1887. 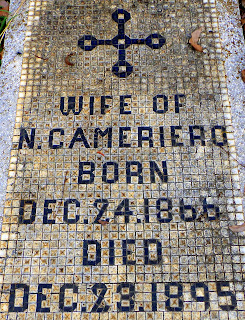 I wanted to determine if Ella was still married at the time of her death seven years later. A database search produced no results, so I went page by page of the 24th and 25th December 1895 editions of The Macon Telegraph, finding it hard to believe there was no mention of her death. The first find on page 8 of the 24 December edition speaks of Ella's death:

The interment will take place today, the funeral services to be held at St. Joseph's Catholic church at 9:30 o'clock.

Mrs. Cameriero was well known in Macon, where she spent the greater portion of her life. Before her marriage she was Miss Ella English.

Not enough information, so I kept going. The next day's news included the following:


BURIED ON HER ANNIVERSARY.
Mrs. Cameriero's Funeral Occurred on Her 29th Birthday Anniversary.
The death of Mrs. E. N. Cameriero was peculiarly sad. On her 29th birthday anniversary she was buried in Rose Hill cemetery.

She had been a loving wife and a devoted Christian, being a member of the Roman Catholic church. Her bereaved family consist of a sorrowing husband, and two little chldren, one little babe only a few hours old when its mother died. The other child is a bright little boy. Mrs. Cameriero's mother lives in Atlanta.

Sr Crystal Mary said…
How sad and very interesting. Many of the old graves hold a story, unlike those of today. This lady obviously died in child birth.. So long ago and probably forgotten by many, and now remembered by you.
June 8, 2012 at 2:33 AM

n_fort said…
Mrs. Ella Cameriero was married to my GGGUncle. Since I read this post in 2012, I have been working hard to locate the infant child she left behind. We, as the family, had never heard of this second child. I have been unable to locate said child but am still working very hard at this.