By S. Lincecum 08 September
Velma F. Williams was born 28 January 1900 in Ellaville, Georgia to Henry J. and Mamie Williams. She attended Georgia Normal and Industrial College, "A State Institution for Georgia Girls," located in Milledgeville. She was a senior in 1919. In 1920, she was still listed with her parents in the Ellaville Federal census with an occupation of public school teacher.

In October 1922, Velma married William Wallace Peavy, Jr. Their engagement was noted in the 24 September 1922 edition of the Atlanta Constitution:


Engagements
WILLIAMS -- PEAVY
Mr. and Mrs. H. J. Williams announce the engagement of their daughter, Velma, to Wallace Peavy, Jr., the wedding to be solemnized in October at the Methodist church, Ellaville.

After her marriage, Velma made her new husband's home town her own -- the little railroad stop of Byron, Georgia. The Peavys were prominent there.

In 1930, Velma and her husband were living next door to his parents. The William Wallace Peavy, Sr. home still stands today on the corner of Heritage (formerly Railroad) and Acadmey streets. Wallace, Jr. was farming on his father's land. Here is  a snippet of an image of the 1930 census records showing the families of Sr. and Jr.  Following that is another photo of the home, taken in 2004.

Velma died 24 December 1989 in Union Point, Greene County, Georgia. I presume she was visiting or staying with her daughter at the time. Her residence was still listed as Academy Street in Byron, Peach County.

Her obituary was listed in the 26 December 1989 edition of the Augusta Chronicle:

The funeral will be at 2 p.m. today at Byron United Methodist Church. Burial will be in Byron City Cemetery.

Mrs. Peavy, a native of Ellaville, had retired as a schoolteacher from the Peach County school system after 32 years of service. She was a member of the Georgia Retired Teachers Association and Byron United Methodist Church. She was a graduate of Mercer University, Macon. 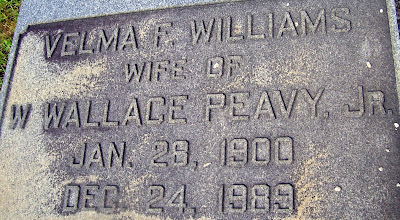 Velma was my second cousin, twice removed in law.