By S. Lincecum 19 January
I can't believe there has never been a post about the Weeping Willow tree as a gravestone symbol on the Southern Graves blog, especially since it was one of the first images that slowly replaced death's heads and soul effigies.1 It's definitely a common symbol.  I found a beautiful example at Walker Cemetery in Bleckley County, Georgia:

If we want to delve deeper into the above image, take a look at the ivy vines going up the base of the tree. It is another symbol of immortality, as well as loyalty.  Furthermore, the leaves symbolize the Trinity.3 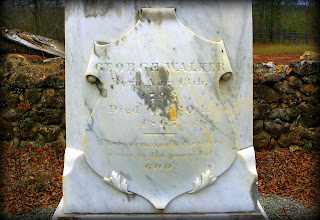 The weeping willow pictured above is part of the tombstone placed for George Walker (1793-1865). Another part of the epitaph is, "There remaineth therefore a rest to the people of GOD." This is found in the Bible, book of Hebrews, chapter 4, verse 9. It is one of the promises of God.

Anonymous said…
I was in a rural cemetery in Tennessee yesterday and saw many weeping willow motifs that seemed to be by the same artist or after the same pattern dating from the early/mid 19th century.
March 8, 2018 at 10:44 AM