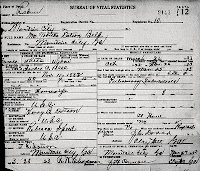 I uncovered Tobitha's death certificate at FamilySearch.org. (Her first name was indexed as Tobeeka.) From this document I learned Mrs. Bell's cause of death was pulmonary tuberculosis, and I also learned the names of her parents. Tobitha was the daughter of Henry B. Dotson and Rebecca Speed, both being among those at rest in Blue Heights Baptist Church Cemetery.

Unknown said…
These are my great grand parents and great great grand parents. Ferber Allen Bell's father is buried in Walhalla SC. His father's name was James Marion Bell and his mother is Nancy Crow. Ferber was born in Oconee SC. If you have more information on Dotson-Bell life could you please share information with me jls1274@gmail.com
February 1, 2014 at 8:09 PM

Karen said…
Tabitha Dotson is my great-grandmother. I am the eldest daughter of Ferber Edward Bell (1941-2005), son of Hubert and Violet, grandson of F.A. Bell and Tabitha Dotson.

I am seeking any documentation about the Dotson & Speed family lineage, as that is harder to find through Ancestry.com and FamilySearch.

If you have any information to help in my search, please contact me at jmuzic99@gmail.com.