Her Body Still Warm: Is She Dead or Not? 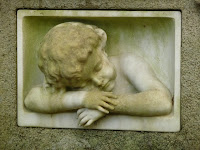 At midnight last night Marya Webb, the girl who died at 82 Forsyth street, was still warm. The girl had been dead then thirty-six hours, but no change in her temperature had been detected. The skin was still apparently moist and the people who were about the body during the day assert that the girl is not dead. During the day several physicians examined the body and all of them pronounced the girl dead. Her mother, however, will not credit these statements, and when an undertaker is suggested becomes perfectly frantic. She will probably be buried today unless some signs of life are detected, which is hardly possible. [The Atlanta Constitution (Georgia), 21 November 1885.]

Maria Webb, the girl whose body remained warm too long after she quit breathing, was buried late yesterday afternoon.

There is now no doubt about her death.

Her body maintained the same temperature from her death up to three o'clock yesterday afternoon. About the time the temperature of her body began to change, and in less than an hour

THE JOINTS WERE STIFF,

and the body presented the appearance of death. The mother of the girl finally became satisfied that life was extinct, and allowed the undertaker to take charge of the body. Late yesterday afternoon the body was interred in Westview cemetery. When the girl was placed in the coffin her body was as cold and stiff as a lump of ice.

Maria Webb was a girl of fourteen years of age. She lived at 82 Forsyth street, and was always remarkably healthy and strong. Two weeks ago she was taken sick for

THE FIRST TIME IN HER LIFE.

At first nothing was thought of her illness, but within a few days after its inception she was unable to leave her bed. The physician who attended her pronounced her disease a fever, and gave her every attention, but notwithstanding the care given her she died Thursday morning about nine o'clock. Soon after her death her body was shrouded for the coffin and then laid upon the bed. No one there thought of disputing the girl's death, but later in the day someone observed that her lips were

NOT ENTIRELY DEVOID OF COLOR,

and that there was a faint tinge of color on her cheeks. In looking at these unusual accompaniments of death, it was discovered that the girl's face was warm. Then it was found that her body, even to the tips of her fingers and the ends of her toes was warm. This discovery created quite a surprise, for the girl had then been dead four or five hours. Later in the day the body was again examined and again found to be warm. The mother was notified of this strange circumstance and was unwilling to believe her child dead. Several physicians were sent for and every one of them agreed in

but none would venture an opinion as to the cause of the warmth of her body.

The intelligence of the strange case spread and Patrolman Harris' presence was required to keep the crowds out of the house. Hundreds of curious persons, however, gained admission and looked at the dead girl. She did not look like a corpse and but for the cloth about her head, would have looked like some one asleep. On Friday other physicians looked at the body and agreed with those who seen it Thursday.

Yesterday morning about ten o'clock the first change was noticed in the girl. Her feet began to grow cold and about noon they were as cold as ice but for more than two hours the coldness did not spread. Finally about three, her body generally commenced getting cold and rapidly the temperature changed. Every physician who saw the girl was positive that she was dead. [The Atlanta Constitution (Georgia), 22 November 1885.]

Couldn't think of anything to add, so figured I'd let the news articles do all the talking!