By S. Lincecum 23 April
Several days ago, I concluded a short run of posts about Anthony Murphy, a man who figured prominently on the Confederate side of the Great Locomotive Chase of 1862. That same day, over at the Rose Hill Cemetery blog, I posted about Peter Bracken, another prominent figure in the chase. Since it seems I have a little theme running here, I'll now share with you the burial site of Jeff Cain, engineer of the famed General seized by Andrews Raiders. 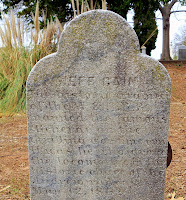 Jeff Cain, as does Anthony Murphy, rests in Atlanta's Oakland cemetery. He actually isn't far from yet another famous interment, golfer Bobby Jones. The back of Mr. Cain's tombstone gives a rendition of his role in the chase, though it is somewhat misleading: Jeff Cain. The historic engineer of the W. & A. R. R. manned the famous General on the thrilling wartime run. It was he who drove the locomotive in the historic chase of the Andrews raders May 12, 1862.

Here's an obituary for Jeff Cain that may also contain a couple of minor inaccuracies:

His Chase of the Andrews Raiders in Georgia in 1862 Made Him a Famous Engineer.

ATLANTA, Ga., Feb. 12. -- "Jeff" Cain, an engineer made famous by his connection with the Andrews raiders in 1862, died here yesterday, from consumption, and was buried today. Cain was born in Pennsylvania, in 1824, and came to Georgia in 1857 to run an engine on the Western & Atlantic railroad, running from Atlanta to Chattanooga.

His train was boarded in Atlanta one day in 1862 by a dozen men, countrymen in appearance, but in reality union soldiers, who had been detailed for the hazardous duty of tearing up the Western & Atlantic road. As soon as the train was in motion they seized Conductor Fuller and Engineer Cain, dropped them off in the woods, and, putting on full steam, started north.

Cain and Fuller secured another engine, chased and captured the raiders, seven of whom were shot in Atlanta. When the war closed and the road, which is the property of the state, was put in order again, Cain was re-employed for life, and a pension ordered to be paid him whenever he became unfit for duty.

Mr. Cain was a union man at heart during the war, and really sympathized with the raiders, but felt that his duty as an employe [sic] was to his superiors, whom he faithfully served. [Plain Dealer (Cleveland, Ohio), 13 February 1897, pg. 3]

According to a route map provided by AndrewsRaid.com, engineer Jeff Cain dropped out of the chase just north of Kingston, GA, when the Confederates had to continue again on foot. This might have been due to Cain's ill health with tuberculosis.