By S. Lincecum 27 September
(From November 2008) - I love sunflowers. So when I found some blooming in Sardis Cemetery, I had to photograph them. One particular plot -- Charles H. and Mary Ann Jones Johnson -- was covered with them. Here's a question: were they put there for a reason? Are these sunflowers symbolism? Let's start with the photos: 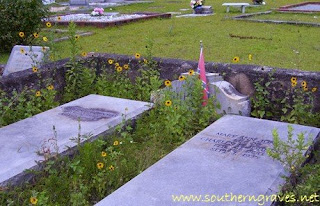 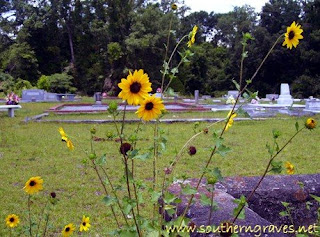 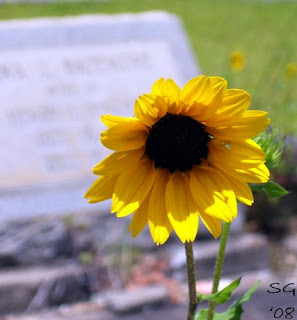 Now, as much as I love cemeteries, I don't have a large library on the subject. I do have a few books, though, dealing with symbolism and southern cemetery symbolism. In only one book, Douglas Keister's Stories in Stone: A Field Guide to Cemetery Symbolism and Iconography, did I find mention of sunflowers in cemeteries. He was referring to a sunflower carved into a gravestone. They signify devotion to the Catholic Church.

This would seem to strike down the theory of symbolism in this case. Sardis Cemetery is attached to a Primitive Baptist Church. I did go looking online as well, and come across "Gravestone Symbolism" at Grave Addiction. The meaning there was given as devotion to God. OK. So symbolism might be back in play.

Keep in mind, these meanings were referring to sunflowers carved on gravestones. I found no mention of sunflowers when looking for information about cemetery landscaping and symbolism there.

I guess, in the end, I can't say for sure. It might just be the planter liked sunflowers and thought they would beautify the plot. Or, maybe Mr. and Mrs. Johnson were fond of sunflowers.

I think Joel Gazis-Sax says it best on his site, City of the Silent:


Here lies the problem of symbol interpretation. Just as with a work of literature, we must understand the point of view of the reader as well as of the author. Cemeteries exist in societies. When we walk in them, we are walking amongst members of our own community. What it all means depends as much on us as on what the stonecutter or the patron wanted to convey.

Maybe the fondness for sunflowers is more about me than about the Johnsons.

Coloring Outside the Lines said…
I think it is rare to find sunflowers on a grave...I usually see roses or some other kind of flowering bush, like yellow bells.
September 27, 2013 at 8:48 AM

Anonymous said…
Birds kindly "plant" sunflowers. We built a rock wall around an area in our yard to plant flowers and much to our amazement one year, the birds created a beautiful sunflower garden! The area with the rock wall was full of sunflowers. I believe the sunflowers on the graves are simply the result of birds doing what birds do. Myself, personally, I believe sunflowers are a symbol of cheer and happiness. Perhaps they are saying, "Do not weep for me, be of good cheer."
September 28, 2013 at 7:42 PM