(From January 2009) It's been almost 209 years since the death of Edward Rutledge, Esq. He was a signer of the Declaration of Independence and Governor of the state of South Carolina. Mr. Rutledge was buried in St. Philip's Church Cemetery at Charleston, South Carolina. Such an important figure in American history surely has an awesome tombstone, right? Not exactly. The gravestone of Mr. Rutledge is not much to look at. A simple slab he shares with his wife. However, the words inscribed on this stone certainly describe the importance of this man, at least to those who made sure those words were put there. 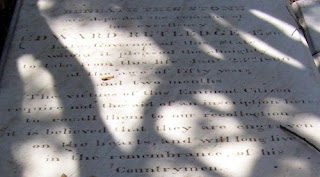 Beneath the Stone
are deposited the remains of
his excellency
Edward Rutledge, Esq.
Late governor of this state
whom it pleased the Almighty
to take from this life Jany 23rd, 1800
at the age of fifty years
and two months.
The virtues of this eminent citizen
require not the aid of an inscription here
to recall them to our recollection,
it is believed that they are engraven
on the hearts, and will long live
in the remembrance of his
countrymen.