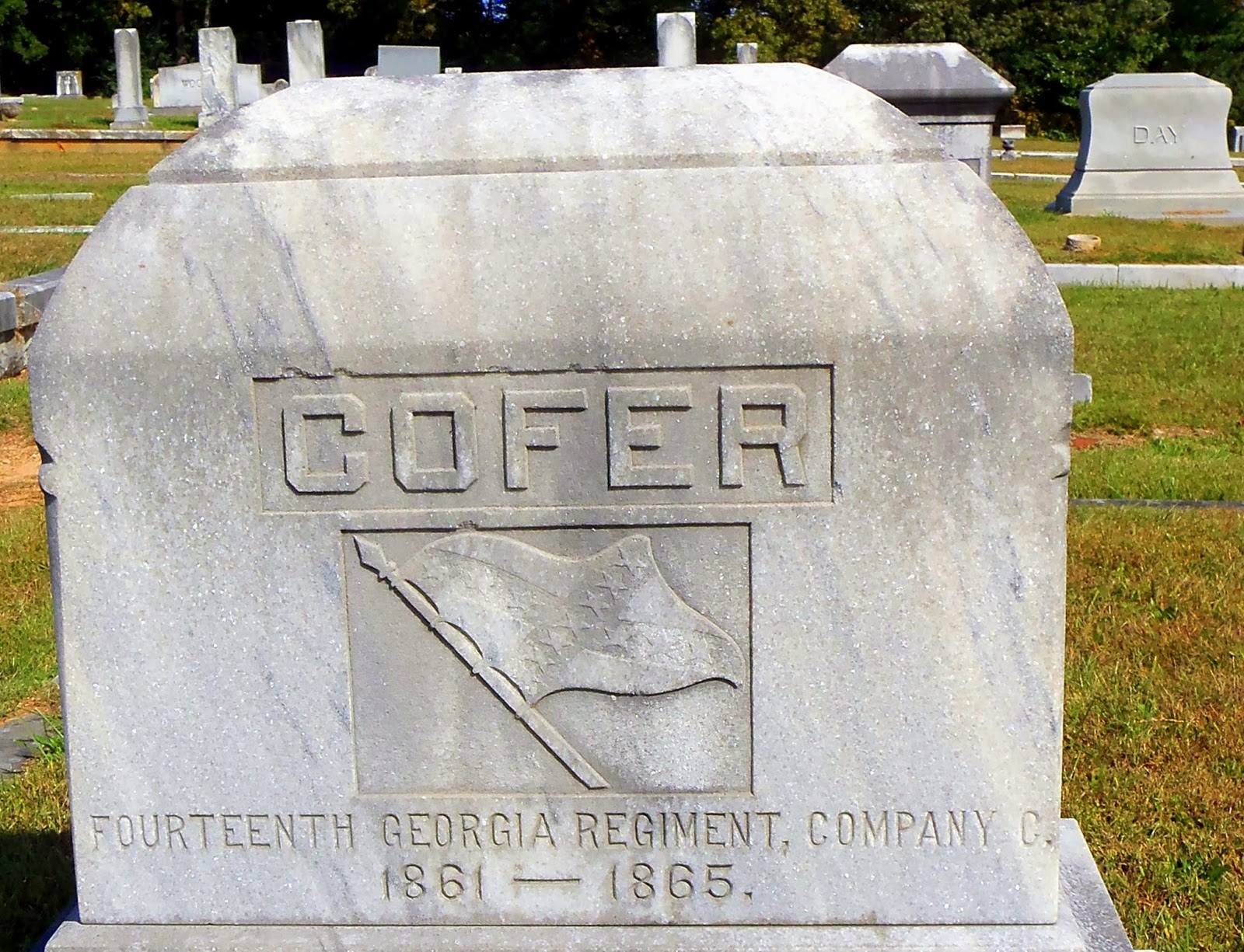 Merritt Jones Cofer rests at Alta Vista Cemetery in Gainesville, Hall County, Georgia. He was born in 1838, and according to volume twelve of Historical Southern Families, a son of Merritt Cofer and Cynthia Ward Bennett.

Merritt's tombstone provides a good bit of information about the man it was placed to memorialize. He was a Methodist Preacher for thirty-six years. He was described as a "Christian - Gentleman - Patriot - Friend," as well as "A Devoted Husband And Father." It is also noted that Merritt was a member of Company C of the 14th Georgia Regiment from 1861 to 1865.

Based on a small amount of research, I can add that it appears Rev. Cofer began preaching about a decade after the Civil War. And according to his Confederate service file available for viewing at Fold3, the latter part of the war was not altogether kind to Merritt. The May-June 1864 company muster roll states he was disabled from wounds and detailed by order of Gen. Lee in Georgia. The Sept-Oct 1864 roll lists Merritt as present, but sick. And the Jan-Feb 1865 roll states he was assigned to conscript duty in Georgia by reason of Surgeon's certificate.

Back to Merritt's tombstone.  Maybe it's because I don't see them often. Quotations from literature, that is. Bible verses (should I consider that literature?) are the usual writings on a tombstone in my neck of the woods. And I would expect to find another one on a memorial dedicated to a deceased preacher, I might add. But whatever the reason, I was made to stop and pause by the last lines of the epitaph for Merritt Jones Cofer, who died in 1912. They are from William Shakespeare's Julius Caesar:


His life was gentle, and the elements;
So mix'd in him that Nature may stand up
And say to all the world, "This was a man."

Dale said…
This was probably written by his daughter Janie: 5 May 1908: "Miss Jeannie Cofer has returned from Boston where she has ben attending the Emerson School of Oratory." 24 May 1909 her students in "expression" at Swainsboro High gave a recital. 3 Oct 1909 Miss Janie Brown Cofer, dramatic reader and teacher of expression and oratory, will give a recital at the First Methodist church on the evening of Octobert 7 at 6 o'clock. She will be assisted by Miss Eda Bartholomew."
April 8, 2014 at 5:08 PM