The One Whose Death was Swallowed Up in Victory

By S. Lincecum 12 June
Georgia Baptists was published just two years before the death of Thomas Stocks. A section of the book contains biographies, one of which is devoted to him. It should be called an autobiography, though, since Thomas wrote the piece himself. The bulk of the article is of course devoted to Thomas's connection with the Baptist faith. Here are a couple of snippets chronicling two event dates that made it to his tombstone:


I was born the 1st of February, 1786, in an Indian fort, near my present residence, in Greene county. The Oconee river was then the line between the whites and the Creek Indians, who were so troublesome as frequently to drive the whites into forts...The men worked in squads, a few days on each farm, and had to put out sentinels to protect them from surprise while at work. While most of the men were thus employed, the Indians frequently attacked the forts, but were invariably repulsed, a few prudent men and the women defending them successfully...This state of things continued until the lands lying between the Oconee and Apalachee rivers were ceded to the United States government...

...In 1826, I was convicted of sin, under Jack Lumpkin's preaching. My wife had been a member of the church several years. After passing through many and sore conflicts, it pleased God to reveal His son in me as my Saviour. No one who has never experienced that feeling can ever be made fully to understand it, but he that has felt it in his heart knows that it is God's work, and not man's...

Thomas Stocks died 6 October 1876. His tombstone in Greensboro City Cemetery glaringly reflects the life he had on earth: The open book (presumably the Bible) atop what could be a pulpit. The bundle of wheat and sickle could have a couple of meanings. One that is readily applicable to Thomas is the sign of a long and fruitful life. He was 90+ years old when he died. Another is a representation of the Christian harvest, when God separates the good from the bad. (Maybe a tad over-simplistic? Here's an explanation from Wikipedia.)


When Thomas died, a short (and pretty cool) blurb was printed on page 2 of the 11 October 1876 Augusta Chronicle (Georgia) newspaper [via GenealogyBank] --


Hon. THOMAS STOCKS, one of the oldest and most prominent citizens of Greene county, is dead. He was ninety-two years old at the time of his death, and had consequently lived during the entire Federal Administration of affairs -- from Washington down to Grant.

The back of Thomas's tombstone reads: 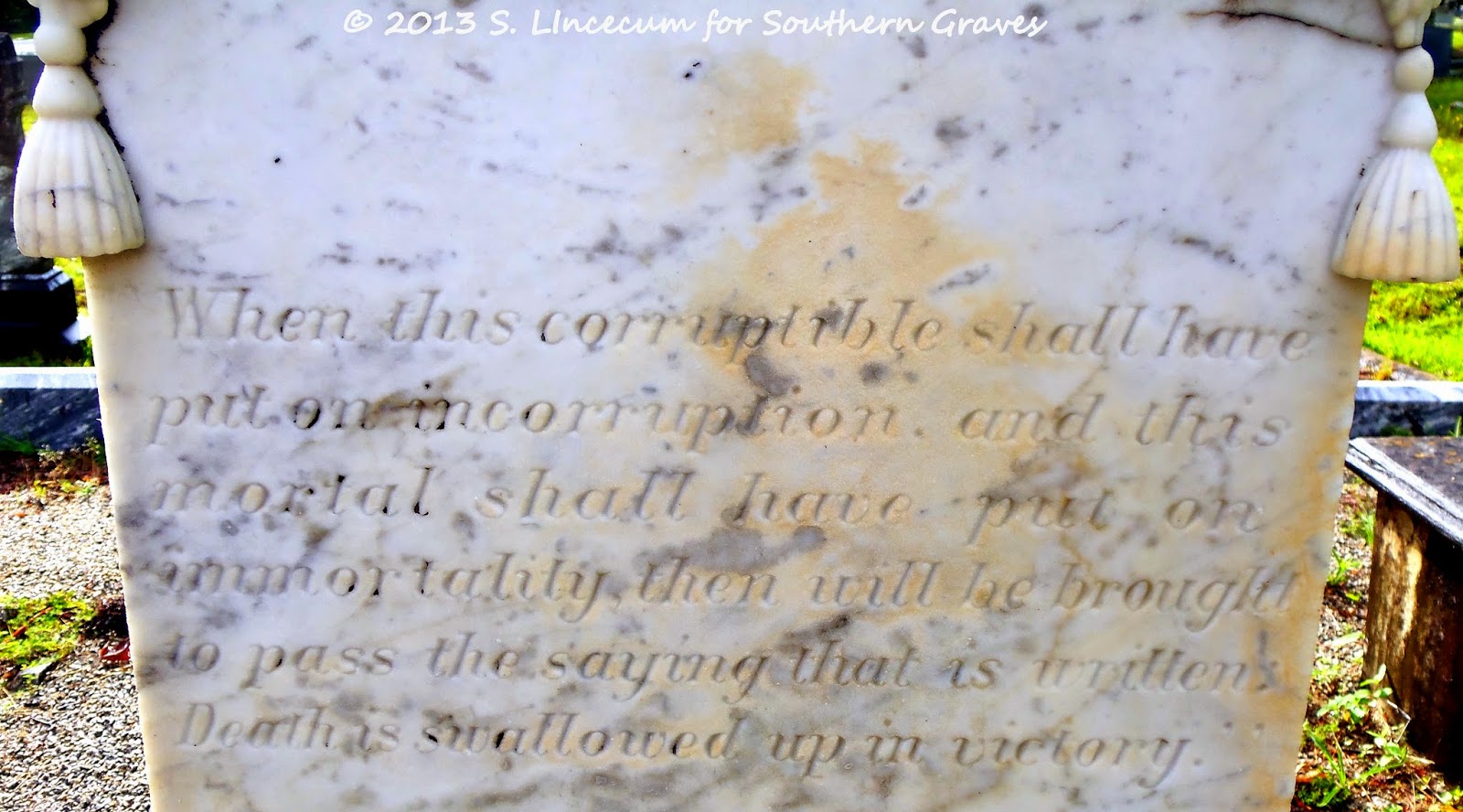