By S. Lincecum 03 March
Resting in St. Paul's Church Cemetery at Augusta, Georgia is Robert Forsyth. "Captain of Light Dragoons in Henry 'Light-Horse Harry' Lee's cavalry during the Revolutionary War, Forsyth had been appointed the first marshal for the District of Georgia by President Washington in 1789." (Per historical marker at Robert's grave site.)


Here are the particulars from page 3 of the 18 January 1794 Augusta Chronicle (Georgia):


AUGUSTA, January 18.
On Saturday last Major ROBERT FORSYTH, Marshall for the State [district] of Georgia, was killed in the execution of his office, at the house of Mrs. Dixon in this place, by Beverly Allen of South-Carolina: A sketch of the particulars is as follows; Major Forsyth being about to serve the aforesaid Allen with a writ; --- from a principle of delicacy, asked him out of the room, where there were several gentlemen present, upon business in which the said Allen was interested; --- he assented, and perhaps added these words "with pleasure"; but instead of following, he asked some one apart, "is not that Major Forsyth?" --- being answered in the affirmative, he inquired about the key of the room opposite, and having obtained it, he retired thither; --- in the interim the Major had made service of a writ on William Allen, brother to the said Beverly, and had granted him some period of indulgence, --- this, was spent in the room to which his brother had retired, and after being elapsed, the Major going up stairs, reminded William that his time was expired, (Messrs. Richards and Randolph, acting as deputy marshalls, were now at the room door and prevented its being entirely shut, which was the object of exertion within) and Major Forsyth advancing towards the door, was told by Beverly Allen, "if he came further, (or words to the effect) he would blow his brains out," which, said Allen, it is asserted by disinterested and respectable persons present, at the same instant discharged a pistol through the opening of the door, and verified his fatal threat, by killing the Marshall on the spot. Thus fell, a sacrifice to his delicacy, by the hand of a wretch, to fill up the measure of whose iniquities, it seem'd only to want an act of such atrocity, a man whose character is highly revered by all who had the pleasure of his acquaintance, whose active, social, chearful and benevolent turn of mind rendered him a useful and pleasant member of society, and whose removal from this scene of things affords a most striking and instructive lesson of mortality.

He was interred in the Church-yard here on Monday with every respect which could be paid him in a public or private capacity: Being, at the time of his decease Deputy Grand Master of the State, as well as Past-Master of the Lodge Columbia, a numerous procession of brethren accompanied his remains, and deposited them in the house appointed for all living

The historical marker mentioned previous (and pictured below) goes on to state Beverly Allen "was arrested and escaped twice, finally fleeing to Kentucky."

And one more biographical note: Robert Forsyth was the father of Georgia Governor John Forsyth. 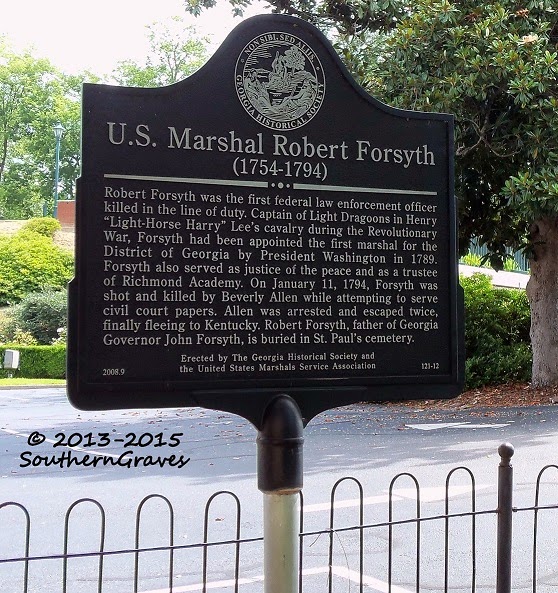