By S. Lincecum 18 April
Just over an hour ago, I posted a biographical sketch written by famed Georgia historian Lucian Lamar Knight at the Peachy Past blog. The subject of the sketch was Judge Walter T. Colquitt, namesake of Colquitt County. It was mentioned that Judge Colquitt was placed, upon his death, in an unmarked grave at Columbus, Georgia's Linwood Cemetery. One of his sons, Colonel Peyton H. Colquitt, was later also buried at Linwood. Conversely, he rests beneath a beautiful tombstone. 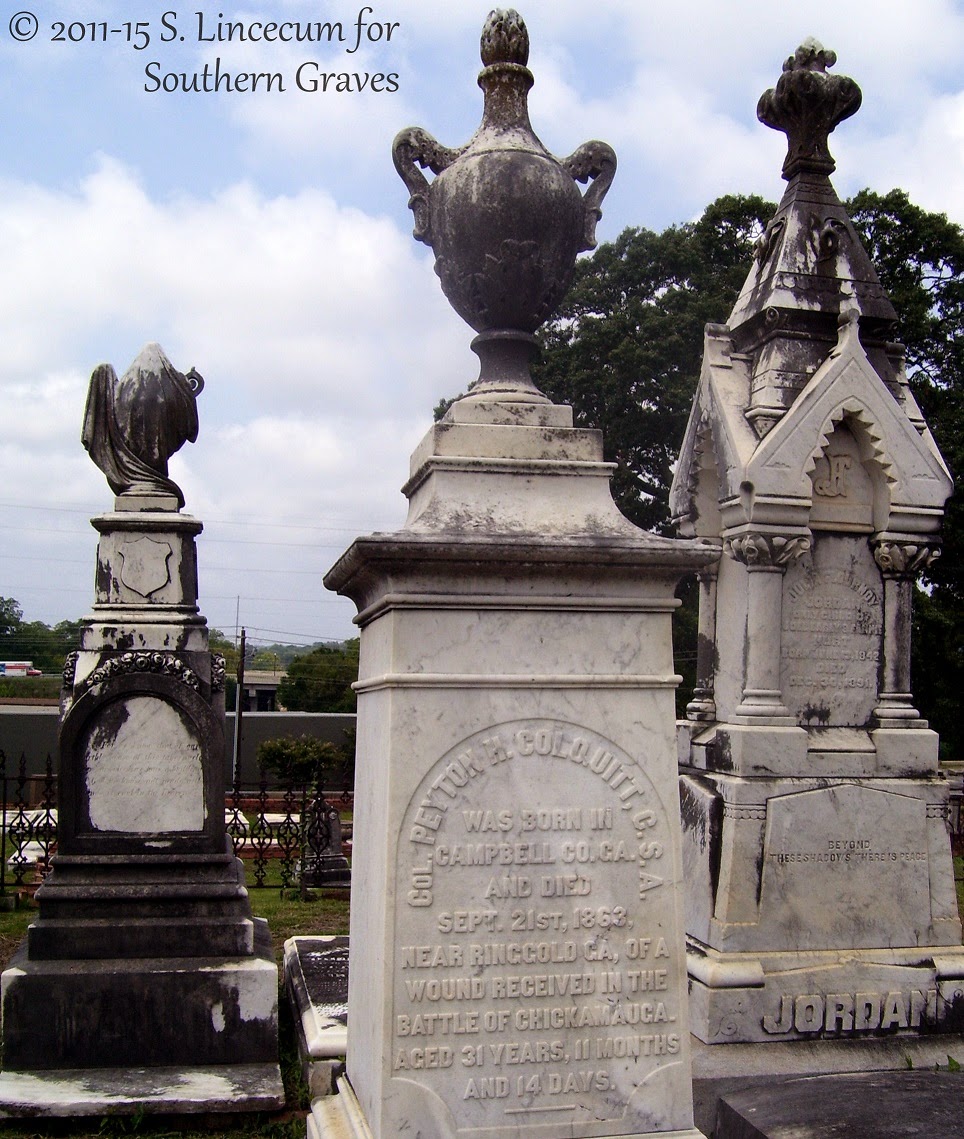 
DEATH OF COL. COLQUITT. -- The announcement of the death of Col. Peyton H. Colquitt, of the 46th Georgia regiment, will fill thousands of hearts with the deepest sorrow. It is said that he died at Atlanta on Wednesday, from wounds received at the head of his regiment in the late fierce struggle on the banks of the Chicamauga [sic].

Col. Colquitt, was a son of the famous Walter T. Colquitt, and, though young, had filled many important civil trusts in the State. He was educated, we believe, for the Bar, but at an early day became connected with the Press, in the capacity of Editor of the Columbus Times, a post which he filled with distinguished ability and uniform courtesy to all. He represented the county of Muscogee for several sessions in the Legislature, both as Representative and Senator, and accepted an enviable post of honor in these bodies. He commanded a company early in the war, and served at Norfolk. He returned home, was chosen Colonel of the Forty Sixth Georgia on the organization of that regiment which he commanded at Charleston, in the west, and finally on the Chicamauga [sic], where he was cut down in the midst of a most promising career.

As a man, we knew Colonel Colquitt well, and can truthfully say that we have never met a more truthful, upright and honorable gentleman...


Death of Col. Colquitt -- Gen. Gist's Order. -- We take a mournful pleasure in publishing the following just and eloquent tribute to the memory of the lamented COLQUITT. A young officer in the 46th Georgia writes to his mother that when this order was read out "there was not a dry eye in the Brigade:"


HEADQUARTERS, GIST'S BRIGADE,
IN THE FIELD, September 24th, 1863 }
General Orders No. 18 -- It is with deep sorrow that the Brigadier General Commanding announces to the command the death of a gallant, accomplished officer and right noble gentleman, Colonel Peyton H. Colquitt, of the 46th Georgia Volunteers. This sad announcement will cause tears to freely flow from hundreds of eyes unused to weeping. He fell, sword in hand, face to the foe, cheering on his command to victory...When we next meet the foe we will avenge his death...

Gwen Sides. said…
Thank you for posting this. My brother and I have been in contact with the cemetery and the local histirical society about a marker for. Walter Terry Colquitt. No one has come through with a marker. We were told he was not buried there but after researching and with the help of Find a grave we were able to locate it. My great grandfather was named after Walter Terry and my grandfather was named after Peyton. Maybe together we might could work on getting a marker.
July 20, 2015 at 3:13 PM

Unknown said…
My great grandfather was named after Peyton Colquitt. His father, William Waters served under him at the battle of Chicamauga, and was from Columbus Georgia. He was of similar age and I presume that they were friends before the Civil War began, since Columbus Georgia was not a large town at the time. My great grandfather was named Peyton Colquitt Waters. - William J Waters,MD
January 19, 2021 at 12:44 AM