By S. Lincecum 18 September
I've been going over my Grandfather's genealogy notes, including a detailed report dated January 1990. I wanted to make sure any information he had that I didn't was noted in my personal research files. As we all well know, revisiting a document will sometimes allow us to see it in a different light. At a different angle. To "see" things we didn't see before.

Such is the case with my great grand aunt Bertha May (Lincecum) Craig. She is on the far right in the picture below.  I didn't realize, or maybe I forgot (to be honest), the amount of loss she suffered in life. 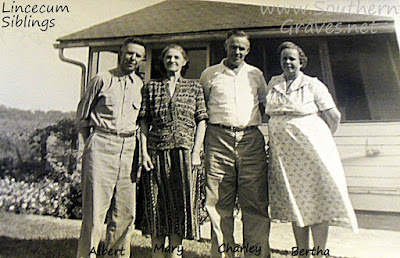 Bertha was born 11 November 1899 to Francis Marion and Annie Victoria (Gibbs) Lincecum. Before she was twenty years old, in 1919, Bertha married Aaron Craig from Kentucky. About sixteen months after their marriage, Bertha gave birth to their first child. A daughter, Lucille, was born 21 October 1920. Bertha and Aaron would go on to produce seven more children, the last being a set of twin boys born February 1937.

The losses began in 1932, when a son named Richard Lee Craig died at the age of just five days. Three years later, Lucille died at the age of 15 years. The year 1937 brought the loss of the twins. Calvan was stillborn. Alvin survived less than nine months.

Adding insult to injury, Bertha lost her husband in 1943, when he was just 46 years old. Bertha was only 43.

Each one of the children's death certificates can be viewed online at Missouri Digital Heritage. Lucille and Alvin died of lobar pneumonia. Richard died of influenza. Each death certificate read the same, burial at Blodgett. This cemetery in Scott County, Missouri holds all four Craig children that did not make it to adulthood.