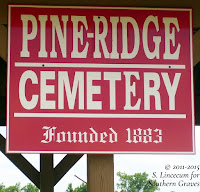 Once in a while I come across a tombstone that sends a little shiver down my spine. That ever happen to you?

While visiting the Pine Ridge Cemetery in Pinehurst, Dooly County, Georgia (founded 1883), I came across a badly broken stone that seemed to tell of a dastardly deed done in 1885. Resulting in what was likely one of the earlier burials in the cemetery. The woman died young, married one year and dead the next, and the word assassinated was conveyed. (See what I mean? A little shiver, I tell ya.)

The following photos are from 2011. I've included what I *think* was the tombstone inscription underneath the second image. 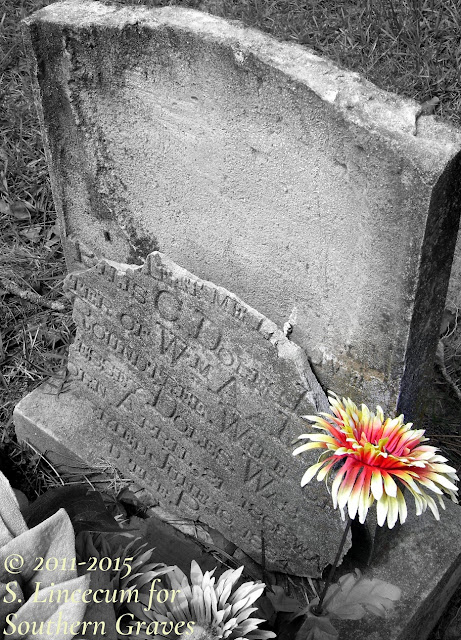 Want to know what happened? I'll let an article from the 31 March 1885 Macon Telegraph (Georgia; pg. 4) fill in "the particulars." Caution: there is some nasty history ahead.

A Mob in Dooly County Take the Law in Their Own Hands.
MONTEZUMA, March 20 [sic] -- The full particulars of the Dooly county murder have just come in and prove it to have been one of the most revolting crimes committed lately.

Jesse Doles, a young farmer living seven miles from Vienna, the county seat of Dooly county, was on Saturday afternoon plowing in his field, not very far from his house. His wife was as usual attending to the domestic affairs. About 3 o'clock in the afternoon the aspect of weather was threatening, and Mr. Doles unhitched his mule and started home before the usual time. Reaching the house and entering he saw his wife stretched upon the bed, lifeless, her throat cut from ear to ear, her head stabbed and arms considerably bruised, and showing every evidence of having been most brutally assaulted. She had been raped. Wild with grief, Mr. Doles sought his neighbors and told the terrible tale.

The search began, and the next morning the murderer was caught near the place where the crime was committed. George Rouse was his name, an ex-convict, a coal black negro. He confessed his guilt to the arresting posse and requested to be guarded and not jailed. The arrest was made early Sunday morning.

Sunday night the guards were overpowered by a mob of cool but determined men, and after Rouse's body had been mutilated, he was stripped and was hung, and is now hanging in full view of passers-by from Montezuma to Vienna. Some of the prominent negroes of this county insisted on taking charge of the prisoner and burning him at the stake, but the whites would not yield him up.

When Rouse was caught, he was splotched with the lady's blood, and he had cut out the knee of his pantaloons to avoid detection.

This is one of the many cases in which the acts of these worthy Dooly county lynchers will be sustained.

While it might appear that justice was served, remember the history of the South and the practice of lynching. It's likely many victims of Judge Lynch were innocent. While I certainly mean no disrespect to the memory of Lillis Roundtree Doles, nor is it my intent to minimize her suffering, I challenge you to not assume George Rouse was guilty. May they both rest in peace.