By S. Lincecum 16 March
Tenant farming is an agricultural system in which farmers rent land from owners for a share of the crops (crop rent) or cash payment (cash rent).  This essentially replaced the slave system dominant in the South prior to the Civil War.  According to the Southern Tenant Farmers Museum in Tyronza, Arkansas, "Terms of contracts [for tenant farmers] varied, dependent on whether the laborer owned any equipment or purchased his own seed and supplies. Crop rent contracts generally required that one-fourth to one-third of the crop be paid to the landlord. Sharecroppers, at the lowest rung of tenant farming, lacked equipment and capital, which had to be provided by landlords. Thus, they received a smaller percentage of crops, typically 50%."

Tenant farming, especially for sharecroppers, was a hard way to make a living.  Constant, back breaking work was required to just get by.  Then the stock market crashed in 1929, and crop prices plummeted along with it.  Both rich and poor were in critical condition.  Tenant farmers were described by federal inspectors as a "picture of squalor, filth, and poverty" (per STFM linked above).

The Agricultural Adjustment Act went into effect in 1933.  Government checks were sent to farmers to offset loss of income when the production of cotton was intentionally reduced.  Not only was this another blow to tenant farmers because fewer were needed, but the bailout checks were only sent to landowners.  While they were supposed to share with tenants, I'll bet that was a rarity.

Along comes the Southern Tenant Farmers Union in 1934, formed to fight for the rights of tenant farmers, sharecroppers, and farm day laborers.  This was a coming together of white and black, as well as men and women.  That alone makes it a historic accomplishment.

Myrtle Terry was born in 1891 in Alabama.  She was orphaned at a young age and bounced around between relatives.  About the age of sixteen, Myrtle married Benjamin Franklin Lawrence.  He was also about sixteen years of age, born in Alabama to William M. and Mary (Shields) Lawrence.  [Note:  some say the couple were married when they each were thirteen years of age, but my limited research doesn't lean that way.]

Myrtle and Ben were sharecroppers.  Myrtle, herself, began chopping and hoeing cotton by the age of six.  Elizabeth Payne, author of an article about Myrtle entitled "The Lady Was a Sharecropper" [Southern Culture, Vol. 4, Issue 2 – Summer 1998], says the couple together made more than twenty-five crops by 1937.


Myrtle, Ben, and their five or six children moved to St. Francis County, Arkansas in 1926.  The year before, this county had been the second highest producer of cotton in the country (per "Happy Birthday – Myrtle Lawrence" at Self-Rescuing Princess Society blog).  Here in Arkansas is where Myrtle discovers the STFU.  At first, due to its evangelical style meetings, Myrtle thought the union was just another new church.  But when the union organized a cotton-picking strike in 1936, Myrtle and Ben joined.  When their landlord caught wind of their participation, he evicted them.

Myrtle's verbal response, according to the SRPS, was this:  "…you've done yourself the worst day's business you ever did when you didn't give me a crop.  Because if I'd have had it, I'd have had something to keep me busy part of the time, but now I'll have nothing to do all year but sign up all your tenants in the Union, and I'll do it, too." 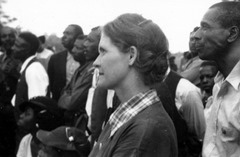 Myrtle meant what she said.  Less than a year after the strike, Myrtle Lawrence was considered the best organizer of African Americans the union ever had.  She also had a knack for getting skeptical whites to accept them.  Myrtle is quoted as saying (per SRPS),

It should be noted, however, that the union tried to keep Myrtle under wraps.  While they used her organizing skills, they considered her "not respectable" due to her "spitting publicly [in a pink paper wrapped coffee can, no less!] and acting exhuberantly." [Per Encyclopedia of Arkansas, and SRPS blog, citing Elizabeth Payne.] 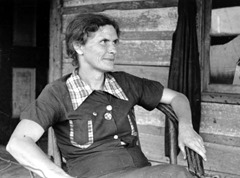 Membership in the STFU was declining by the 1940s, likely due to industry rising in anticipation of World War II.  About 1943, Myrtle and Ben Lawrence moved their family to Tampa, Hillsborough County, Florida, where they worked at shipyards for some time.

Myrtle's husband died 3 January 1970.  It was another ten years before Myrtle would join him in death – 19 May 1980.  They both were set to rest in Myrtle Hill Memorial Park at Tampa.


I, of course, wanted to include a gravestone image with this article.  I submitted requests via FindAGrave.com, but haven't been blessed with a photo yet.  I did find one for a child of Myrtle's.

The story goes that Myrtle had two daughters, both born in the winter.  One she named Snowbank, the other Icey Jewel.  Snow went on to marry John Thomas Kimbrell.  The couple was living in Alabama when he passed away in 1956.  Snow then moved to Tampa.  At some point, she married again to a Mr. Thomas.  Snow (Lawrence) Kimbrell Thomas died 23 June 1988.  She, too, was buried at Myrtle Hill Memorial Park.

This post was written, in part, for women's history month.  I would be remiss not to also note, however, that the woman I consider my mother-in-law is a granddaughter of Myrtle Terry Lawrence.  And without her, I likely would not have known about this remarkable, though very much unsung, piece of woman's history.

By the 1960s, the STFU was defunct.  But I leave you with this very important sentiment from the Southern Tenant Farmers Museum:


"Though it slipped quietly out of existence, it provided a lasting legacy of integrated, non-violent protests that would be carried on into the labor and Civil Rights movements of the coming decades."

[Note:  all black and white photos in this article are from the Kheel Center at Cornell University, via Flickr.  The copyright status is listed as unknown, but a creative commons license to share is provided.]

CW Whitney lll said…
We had sharecroppers up until the mid fifties who also helped us in the grist and sawmills. Good people. Never knew about the union thing, thanks.
March 16, 2016 at 11:17 PM

Treat and Trick said…
Thanks for your visit and leaving your lovely comment on my blog. Happy Sunday..
March 19, 2016 at 9:43 PM