A Tale of Two (Death) Certificates for Church Record Sunday

Sliding this in among the A to Z Challenge posts. Hope you're enjoying it, whether participating directly or following along. 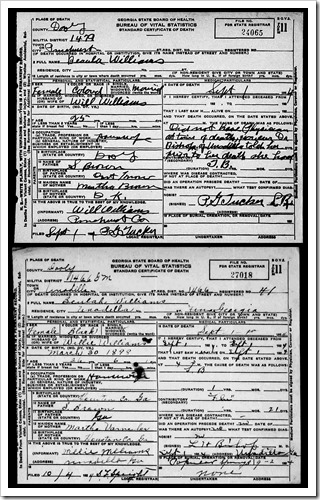 It happens from time to time, I know, but I still don't think it's all that common.

Beaulah Williams has two death certificates.  They both can be viewed online at FamilySearch.org within the Georgia Deaths, 1914-1927 collection.  At first blush, there might not seem to be any earth-shattering differences between the two certificates.  However.  If you're trying to piece together the story of Beulah's life, and maybe even trying to trace your lineage, having one death certificate without the other might just put you at a disadvantage.

So for that reason, here is the information from both certificates.  If you stick around 'til the end, you might even get another surprise.

17.  The Cause of Death Was as Follows (a)Did not have Physician at time of death, however Dr. Bishop of Unadilla told her prior to her death she had T.B. (b)[States there was a physician of record the day Beulah died, and that he last saw her alive that day.  Time of death being 4 p.m.] T.B. (Duration) 1 yrs

So here's another twist:  while there is a Poplar Springs Cemetery in Dooly County, Georgia, I don't think Beulah is buried there.  Why? Because I think I visited her back in 2011 while documenting some of Mt. Moriah Baptist Church Cemetery.  In fact, these digital images I took are the reason why I was poking around in her life to start with --

Beulah appears to rest next to her son, Willie B. Williams, a soldier during World War II.  She is also near Rev. W. A. Willams [sic].  I believe this was her husband.  The other woman resting in this row is Carrie M. Williams (1911-1977).  I don't know how she fits, since I did not see her in census records to label her a child of Beulah's.  Maybe she was a wife to Rev. W. A. after Beulah passed away.  Or maybe she was married to soldier Willie B. 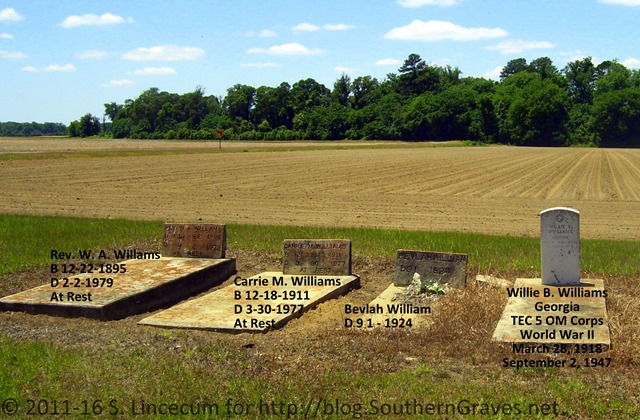 I know this is a long post, but I feel compelled to add the following:  this is an example of why finding "proof" of something when conducting genealogical research can be darn near impossible.  Documents – which many take as the gospel – are sometimes incomplete.  Are sometimes flat out wrong.  Heck, what if Beulah's stone pictured above is a cenotaph, and she was buried at "Popular Springs?" I wasn't around to pay my respects at her graveside in 1924.  Evaluating evidence and (hoping I'm using the term correctly) looking for the preponderance of said evidence is where it's at, folks.

If you stuck around to the end, I thank you.  Not trying to preach a sermon, so I'll stop now.