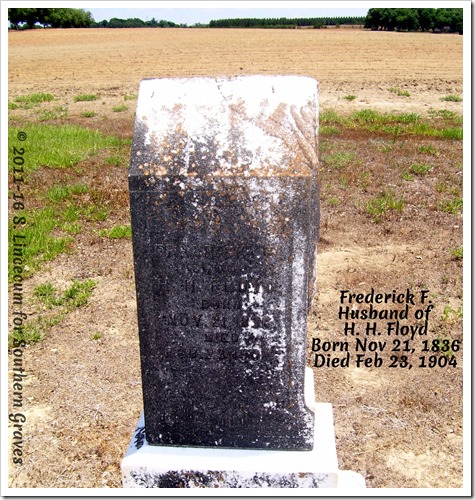 This is a horrible picture, I know.  Under normal circumstances, it would not make it's way on to the blog.  "But it fits the letter F so well," she whines…

According to his FindAGrave memorial (which, btw, has a better photo -- and also begins with the letter F), Fred was a private in Company C of the 55th Georgia Infantry during the Civil War.

Mr. F. F. Floyd, a prominent farmer of near Midway, passed away at his home Monday night.  His death was unexpected as he was not thought to be very sick.  He had been complaining about a week and the sudden change is thought to have been from an attack of heart failure.

His death is universally regretted by the citizens of that community.

Darla M Sands said…
I'm really enjoying this. How awesome to honor those who've gone before.
Awakening Dreams and Conquering Nightmares with a Pen
Happy blogging! And be well.
April 7, 2016 at 1:07 PM

Nicole said…
Sudden deaths are so puzzling. It's nice that Mr. Floyd is still remembered in his community.