Cause of Death Defined: Bright's Disease

This may, or may not, turn into an oft written about topic (causes of death defined) here.  How would you feel about that? 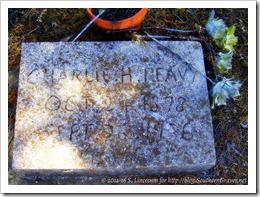 Someone who is interested in tombstones and obituaries is naturally drawn to death certificates, right? Good.  Me, too.  It's also not a bad idea to learn one's medical history.  That knowledge might come in handy one day.

So! Charlie Homer Peavy, son of yesterday's Charlie Peavy, was born 24 October 1878 in Dooly County, Georgia.  He spent at least thirty years of his life in the agricultural industry, farming his last field about 1933.  This blue eyed young man married at least once, maybe twice, but was "single" at the time of his demise in 1936.  Charlie H. Peavy was buried at Harmony-Smyrna Cemetery.

Charlie's cause of death was listed as "chronic brights." [You can see his death certificate here at FamilySearch.  Sign-in required.]

Bright's disease is a historical classification of kidney diseases that would be described in modern medicine as acute or chronic nephritis.  It is typically denoted by…blood plasma protein in the urine and is frequently accompanied by edema and hypertension.

Edema is "an abnormal accumulation of fluid…beneath the skin and in the cavities of the body which can cause severe pain."  And hypertension is high blood pressure.  The common symptoms of kidney disease were first described in 1827 by Dr. Richard Bright.  Since it is now known these symptoms are linked to various "morbid" kidney conditions, the term of Bright's Disease is "retained strictly for historical application."

An ancient word for edema is dropsy.  According to The History of Nephrology,

[Edema] can be caused by heart or liver or kidney disease, or by malnutrition.  In all of these it was a pretty bad sign in ancient medicine as it meant that the patient had advanced disease that was likely to kill them.  By the early 1800s it was realised that some patients with dropsy had albumin in their urine.

Although acute Bright's disease had some available treatments, there was nothing to be done for a chronic case, as was Charlie Homer Peavy's.

See also:
- Exotic Revival Mausoleum for W. A. Rawson
- Z is for Zilphy and Zollie