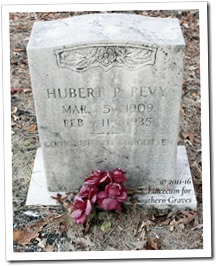 Hubert Preston Peevy was born 5 March 1909 in Gwinnett County, Georgia to Grover C. and Mattie (Jones) Peevy.  A month before reaching his 26th birthday, Hubert died.  This last life event took place in the early morning of 11 February 1935 in the Sugar Hill area of Gwinnett County.  Less than two weeks prior to his death, Hubert had been at work.  He was employed by Bona Allen, Inc., and had been so for fifteen years.  If the source -- his death certificate via FamilySearch.org -- is accurate, Hubert began working for the company about the age of 21.

Since I had no idea this company existed (and I lived in Gwinnett County for about four years), it was interesting to discover Bona Allen, Inc. opened in 1873 in Buford, Georgia.  The company was owned by Bonaparte Allen, and was the largest tannery in the nation.  According to Wikipedia, "…the company made horse collars and saddles, postal bags, cowboy boots, shoes and more."  The small map below shows that Sugar Hill, where Hubert likely lived, is not far from Buford.

Turning back to his death certificate, we see Hubert's job at the company was Shoe Maker.  Bona Allen, Inc. had expanded into shoes and boots around 1918.  The Great Depression caused them to slow production, and the shoe and boot product line ceased in 1941 officially due to work force issues.  A contract with the U.S. military restarted production, but only for World War II.

On the flip side, the Depression era was actually a boon for overall business at Bona Allen, Inc.:

The nation's farmers could no longer afford to operate their tractors, so they had to return to using horses. This, in turn, created a demand for saddles and collars, as well as all other horse related equipment.  [Wikipedia]

Thus, Hubert Peevy was working at Bona Allen, Inc. at a time in their history when they had the highest number of employees.

Jumping ahead in the story of Bona Allen, Inc., the company was sold in 1968.  It operated under the Bona Allen name until a fire too devastating to come back from closed the tannery for good in 1981.  The main tannery building was placed on the National Register of Historic Places in 2005.  Unfortunately, another fire occurred just last year and the building was allowed to "burn itself out" because Gwinnett County officials were concerned about leftover chemicals.  For more information about this company's history, go to the Wikipedia article.

Hubert Peevy rests at Hopewell Church Cemetery in Gwinnett County.  Grover C. and Mattie J. Peevy are there, too. 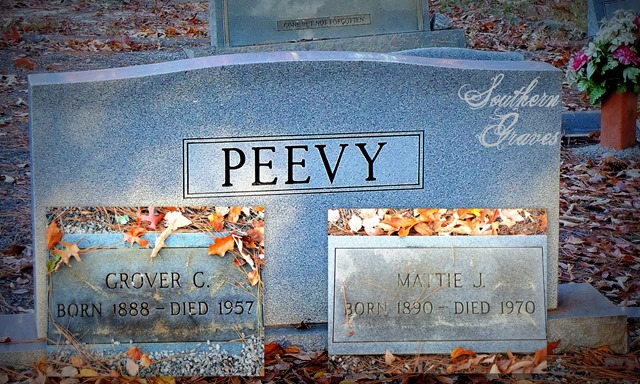