James W. Langley, son of William and Malinda, was born 31 August 1846 in Georgia.  J. W. served as a private with Co. E, 8 GA Infantry during the Civil War.  He married his second wife, Maggie R. Craft, about 1881, and they had at least five children.  Maggie died in the year 1928.  In 1930, the widowed James was staying with his daughter Lemma and son-in-law on Bacon School Road in the Vickery Creek area (near Cumming) of Forsyth County, Georgia.  James died, while residing in the same area, 3 July 1933 at the age of 86 years.  He was laid to rest at Trinity Church Cemetery in Gwinnett County near Maggie. 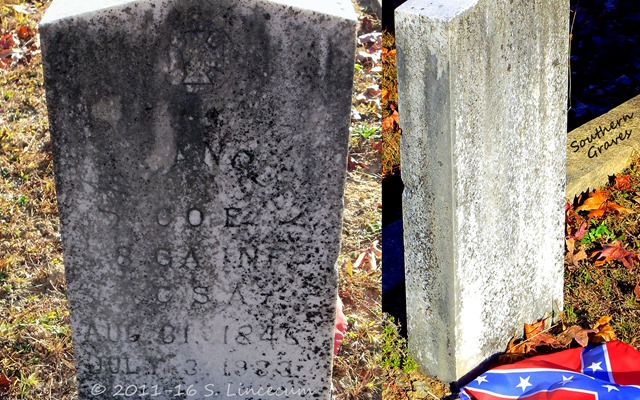 I located James W. Langley's death certificate at FamilySearch.org, and was heartbroken with what I found.  Though he might have lived a full life in number of years, reading the cause of death saddened me so.

Malignant Cancer of the Eyes and fase [sic] put out both Eyes.

James appears to have possibly suffered with this disease for at least two years.

There was another notation on the document that led to more history.  The question, "What test confirmed diagnosis?" was answered with "Stiner [sic] Clinic." From AtlantaGa.gov:

Funds from the estate of Albert Steiner allowed Grady Memorial Hospital to add this structure in 1922. The Steiner Clinic was dedicated to the research, study and special treatment of cancer and other allied diseases.

This building, located at 62 Butler Street (now Jesse Hill Jr. Drive), was designated historic in 1989.  On the Google Map image below, you can still see Albert Steiner's name.

GeorgiaEncyclopedia.org calls the Steiner Clinic, when it was established, "the world's first and largest comprehensive cancer center… It lasted for about twenty-five years and was a model for future cancer centers throughout the country."

Darla M Sands said…
I tend to forget in this modern era how advanced our forebears were in medicine. Generations built the foundation for where we are today for sure! Thank you for this. It truly is a heartbreaking way for someone to die.
May 27, 2016 at 11:34 AM