Mrs. Williams was…a most estimable lady in every respect.  She was buried at Harmony Monday afternoon at 3 o'clock.  Her death leaves disconsolate her husband and children who have the deepest sympathy of a large circle of friends. 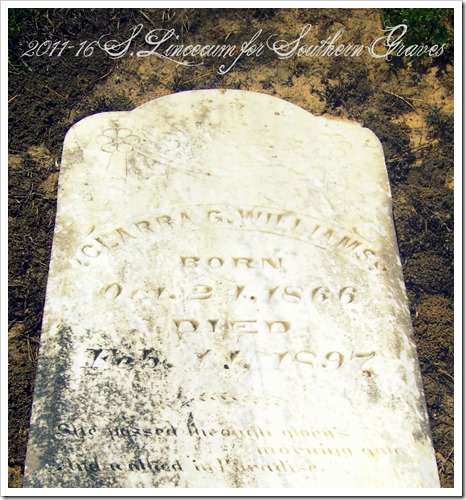 The following is a poem by American editor and poet James Aldrich (1810-1856).  The apropos title is A Death-Bed, and the last two lines were added as part of the epitaph on the tombstone for Mrs. Clarra G. Williams.

Her suffering ended with the day,
Yet lived she at its close,
And breathed the long, long night away,
In statue-like repose.

But when the sun in all his state
Illumed the eastern skies,
She passed through Glory's morning gate
And walked in Paradise.