Mrs. Elizabeth (Strickland) Moore married William H. Sudderth 22 November 1866 in Gwinnett County, Georgia.  The first daughter the couple had together was born 26 February 1869.  Daughter Eunice never married, and stayed with her parents throughout her life. 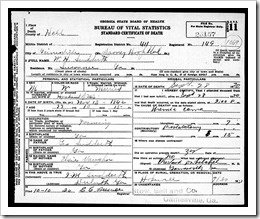 William H. Sudderth, who spent his life farming, died 28 September 1920 at a hospital in Gainesville, Hall County, Georgia.  Just six months after he was recorded in the U.S. Federal census.  Mr. Sudderth's death certificate (image at right via FamilySearch.org; click to enlarge) shares he was born 13 November 1842 to George Sudderth and Elsie Vaughn.  William's cause of death was listed as Uremic coma.  The free [medical] dictionary describes the condition as, "Loss of consciousness caused by the toxic effects of the nitrogen-containing wastes and inorganic acids that accumulate in the bloodstream of patients in renal failure. Coma in renal failure usually occurs after other uremic symptoms, such as loss of appetite, confusion, lethargy, or seizures." Some months prior to his death, Mr. Sudderth had a prostatectomy.

Eunice P. Sudderth passed away 21 August 1922, just 23 months after her father.  Her cause of death was sarcoma.  A disease she had suffered from for 15 years.  WebMD.com says this:

A sarcoma is a rare kind of cancer.  Sarcomas are different from the much more common carcinomas because they happen in a different kind of tissue. Sarcomas grow in connective tissue -- cells that connect or support other kinds of tissue in your body. These tumors are most common in the bones, muscles, tendons, cartilage, nerves, fat, and blood vessels of your arms and legs, but they can happen anywhere.

Elizabeth Sudderth's demise came fourteen months later, on the afternoon of 22 October 1923.  This 85 year old had been the daughter of Henry and Annie Strickland.  Cause of death was Valvular Insufficiency.  Dictionary.com says this is "Failure of the cardiac valves to close perfectly, thus allowing regurgitation of blood past the closed valve." I'm afraid Elizabeth's heart just gave out.  This is bolstered by the contributory factor on her death certificate being noted as Old age.

Mother, father, and daughter Sudderth were buried at Hopewell Church Cemetery in Suwanee, Gwinnett County, Georgia.  Here's a photo from my visit in the fall of 2011. 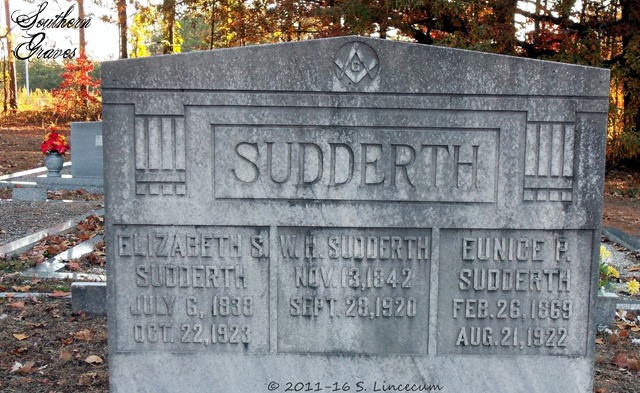 Unknown said…
This is fascinating...in a morbid, voyeuristic kind of way. Haha. I'd love to know more about the daughter. Why did she live with her parents? Did she not marry or have children? I love the single tombstone. Did she purchase it with the intent on staying near her parents even in death?
May 14, 2016 at 8:51 AM

S. Lincecum said…
It is fascinating, Lori. The perils of research: more questions with few answers. As far as I can tell, Eunice did not marry or have children.
May 14, 2016 at 11:22 AM

PJ said…
Really interesting and my first thoughts as a nurse are how awful a prostatectomy must have been in 1920. I've been to an old operating theatre museum which had all the old surgical instruments, so I can't even imagine how much pain he would have been in after that surgery.
May 15, 2016 at 4:11 PM