Not Unwed, but Divorced: Ora B. Adams 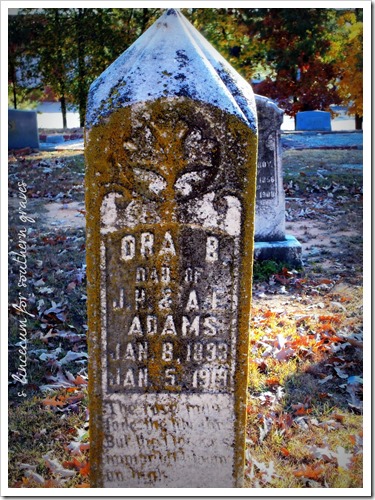 Ora Beatrice Adams was born 8 January 1893 in Gwinnett County, Georgia to James H. and Annie Elizabeth (Weathers) Adams.  She died just a few days before her 26th birthday, and was laid to rest at Trinity Church Cemetery in Gwinnett County.  A lovely epitaph on her tombstone reads:

The rose may fade

But the flowers immortal

Initially, I was having a difficult time finding out much about Ora.  I was especially wondering why she wasn't coming up in a death certificate search.  When that happens, I will sometimes turn to FindAGrave.  If someone had created a memorial for her, maybe it would be managed by someone related or at least someone with more information than I.  (In other words, someone who cares about more than their contribution numbers.)

And if that's not true, maybe there is a better image for me to scour for information than the one I took.  (It happens!)

In Ora's case, I got lucky.  Contributor Quietly Resting created a memorial back in 2010.  Funny thing, the full name was listed as Ora Beatrice Adams Bauchom.  I looked at all the pictures, those on the memorial as well as my own, trying to find this other surname.  Thought I missed it somewhere.  But I didn't.  The nice FindAGrave member also included other information supposed to have been obtained from Ora's death certificate.  (I knew there should have been one!)

So I took the tip and went off to find MRS. Ora B. Bauchom's vital record.  It was easily accessible at FamilySearch - 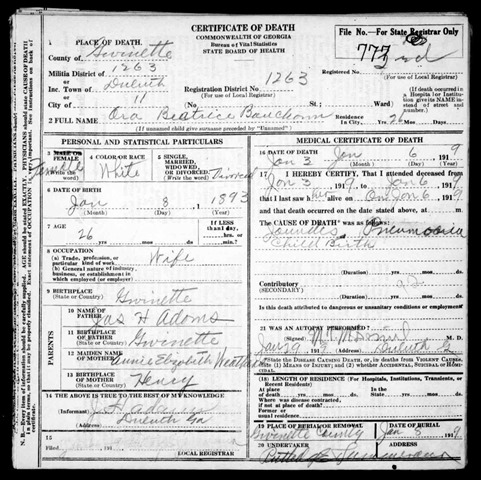 The death certificate seems to show a sad turn of events in Ora's life.  Her cause of death was Jaundis, Pneumonia, Child Birth. And the clue I was looking for as to why her married name was not inscribed on her tombstone was in the marital status section.  Ora was divorced.  I guess her parents didn't think she needed to be remembered as anything other than their beloved daughter.