James Pierce, Who Stood High in His Community, was Cut to Death 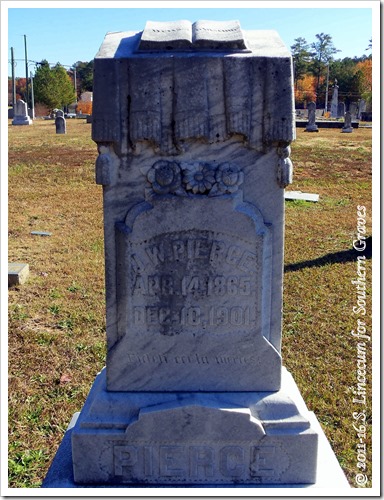 J. W. Pierce seems to be the only member of his immediate family to be buried at Level Creek Cemetery in Suwanee, Gwinnett County, Georgia.  He was born in Lumpkin County, Georgia 14 April 1865 to Wilson Jasper Pierce and Letty Caroline Roberts.

James first married Sallie Pitner 28 August 1884 in Lumpkin County.  They had at least three children before Sallie died in 1899.  James, on Christmas Day of 1900 in Fulton County, then married Lillie Allen Collins, a widow.  This association with the Collins in-laws of Lillie brought about James' death less than a year later.

The particulars, as laid out in the 11 December 1901 Augusta Chronicle (Georgia), follow.  Full article is available at GenealogyBank.

GEORGIANS IN A FATAL FIGHT

DUEL WITH KNIVES ON A RAILROAD TRAIN.

ONE MAN IS CUT TO DEATH.

James Pierce and Thomas Collins, Settling a Family Trouble, Cut Each Other -- The First Killed, the Other Fatally Hurt.

Doraville, Ga., Dec. 10 -- In a bloody duel with knives James Pierce, a farmer was cut to death and Thomas Collins, a merchant, of Sheltonville, was probably fatally wounded on the Southern Bell, the accommodation train which is due in Atlanta at 8:30 this morning.

Both parties boarded the train at Duluth, and shortly after it passed Norcross it is said that Pierce, who was in the smoker, went to the first-class coach and walking up to Collins said:

"I understand you said you were going to slap my face, and now you have got to do it."

With this the two men drew their knives and clinched, slashing each other on the throat and head.

The passengers in the coach made a break for the rear car, where the conductor was engaged in taking up the tickets from passengers who had boarded the train at Norcross.

When he learned of the trouble Conductor Willingham, who is courageous and a great favorite with the patrons of the road, called on D. K. Johnson, of Norcross; Elmer Barrett and Robert Moon, of Flowery Branch, and John Smith, of Gainesville, who followed him into the coach where the men were fighting.  When Conductor Willingham and D. K. Johnston [sic], who were the first to reach the men, arrived they found them between the seats, almost completely exhausted by the loss of blood, with Collins holding both knives in his hand while Pierce was holding him by the throat.

They were soon separated, but it was seen that Pierce was fatally wounded, as the jugular vein on the left side of his neck had been severed and that several other wounds had been inflicted.  An effort was made to stop the flow of blood, but without success.  He died from the loss of blood soon after the train reached this place.

Collins received a serious wound in the temple, another on the throat, and several others on the head and face, from which he bled profusely, but the wounds are not necessarily fatal.  He was taken in charge by Doctors Flower, and his wounds dressed.  He is very weak, and the loss of blood may have been so great that he will not recover, although there are indications that he will survive the wounds.

[A witness stated,]..."Not a word was spoken by either of the men after the fight started.  It was a fight to the death."

Cause of the Feud.
Pierce married the widow of Green Collins, a brother of Thomas Collins, and it appears that Mrs. Pierce after her second marriage, claimed that she was not fairly treated in the division of the land owned by her former husband, and became very bitter on this account.  After she married Pierce he took up the fight against Thomas Collins, which has been almost a continual quarrel until it ended in the duel today.

Collins is a highly respected merchant and is an influential citizen.

Pierce was a farmer and also stood very high in his community. -- Atlanta Journal.

The two Latin phrases written about yesterday were found on this tombstone for J. W. Pierce.

PJ said…
Such drama - you see these things in films and forget that they are based on real live events. Must have been terrifying for the other passengers - I travel by train regularly and that would be awful.
July 25, 2016 at 11:13 AM

S. Lincecum said…
Most definitely, especially with the feeling of being trapped in until train is stopped.
July 25, 2016 at 2:51 PM

Darla M Sands said…
What a shameful waste of life. I appreciate your efforts to share this. It's fascinating, if horrific. I'd rather read about such than watch, for sure.
July 29, 2016 at 3:05 PM