By S. Lincecum 28 July
If anyone has anything to add about Uncle Dan, please comment.  I found myself wanting to know more and more the deeper I tried to delve… 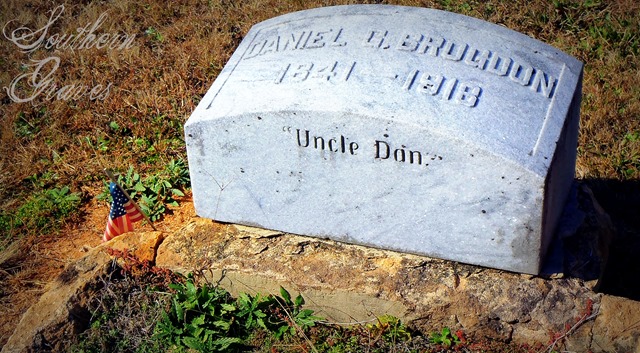 He was born 1841 in Gwinnett County, Georgia to Hope J. and Emily Brogdon.  One of at least 13 children born to the couple.  Based solely on census records, Daniel G. appears to have started life just like most who were born the son of a farmer – attending school when he could, and working the land as soon as he was able.

When Daniel was 20 years old, he – along with his uncle Noah Richard and brother Shadrach G. – joined the Gwinnett Beauregards, Company A of the 42nd Georgia Infantry Regiment, C.S.A.  Less than two months in, toward the end of April 1862, Dan was at a hospital in Knoxville, TN.  Another short two months pass and Dan's uncle Noah was dead at Cumberland Gap.

Daniel G. Brogdon was captured as a prisoner of war twice.  Once at Vicksburg, Mississippi in July of 1863.  In this instance, he signed an Oath of Allegiance (image at right) and was paroled two days after capture.  Dan was also captured in his home place of Gwinnett County, Georgia.  Though I don't know the date of capture, his compiled service record at Fold3 states he was sent to the military prison at Louisville, KY.  Dan was this time paroled July 1864 after signing another oath stating he would remain north of the Ohio River until the end of the war.  Accompanying the oath from Louisville, was a physical description of Daniel (see line just above top image).

A rough few years, I'd say.

Now I don't know if "it" stemmed from childhood and was undetected, or if the war had such an adverse effect on Daniel that he no longer handled life as well as before.  But the 1870 Gwinnett County, Georgia Federal census appears to my eye to note, on the line dedicated to Daniel, the word Lunatic.  [Please correct me, if I'm wrong.] For this census, Daniel was listed with his parents, yet after the servants.

The 1880 Gwinnett County census also enumerates Daniel Brogdon.  This time, he is listed alone – in his own dwelling – with no occupation.  And this time, there is no mistake in reading the record.  Within the wider Health column, there is a clear line marked in the more narrow Insane column.

The final record found for Daniel G. Brogdon is a Gwinnett County tax list prepared about 1885.  On it is found that Daniel's brother Emory was listed as guardian for Daniel and his 110 acres of land.

That's all I've found thus far.  There should be a death certificate for Daniel, but I have yet to locate it.  I haven't located him in the 1900 or 1910 census, either.

I know the terms "lunatic" and "insane" in those days covered quite a wide range of issues and instabilities.  Many of which would likely be considered and labeled much differently today.  I admit the research is clearly incomplete, so you'll have to draw your own conclusions as to what happened to Uncle Dan.

Darla M Sands said…
Seems another tragic story. I do wonder what constituted his categorization. Now we may be more likely to correctly diagnose a problem but seem unable to get help to the majority of folks. ~sigh~ Sorry to wax morose. Thank you for all the dedicated research!
July 29, 2016 at 2:44 PM