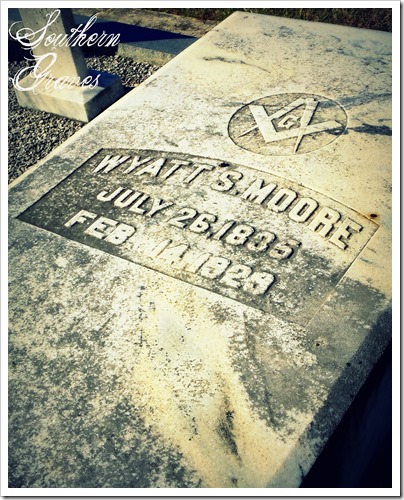 Wyatt Sulzer Moore, whose middle name I've seen spelled more than one way, was born 26 July 1835 in Paulding County, Georgia to Arbin Moore and "Harrett" (Harriett?) Casper.  By the taking of the 1850 U.S. Federal census, Wyatt and family were living in Gwinnett County, Georgia.  Mr. Moore would spend the rest of his life in this county, farming all the while.

Wyatt S. Moore was married three times.  He married first Elizabeth Brogdon.  She was just a few years his junior, born in 1838.  They had at least nine children together, before Elizabeth died in 1881.  She was just 43.

Thirdly, Wyatt married Rachel Elizabeth King.  She was twenty-one years his junior, and died 8 May 1925 at the age of 68.

Though each wife was younger -- and lived longer -- than the one prior, Wyatt S. Moore outlived them all.  Almost four more years would pass, in fact, before his death.  Wyatt S. Moore died on Valentine's day of the year 1929 at the age of 93.  According to his death certificate via FamilySearch.org, in the space where a cause of death should be written, there was "no physician in attendance.  This man was old and feeble for several years."

Wyatt was laid to rest at Level Creek Church Cemetery in Suwanee, Gwinnett County, Georgia.  All three wives are near.

Darla M Sands said…
I may have previously shared this, but it's worth mentioning again anyway (I humbly believe) that the so-called average life-span was skewed by infant mortality. Walking through old cemeteries in my younger days makes the data seem plausible.