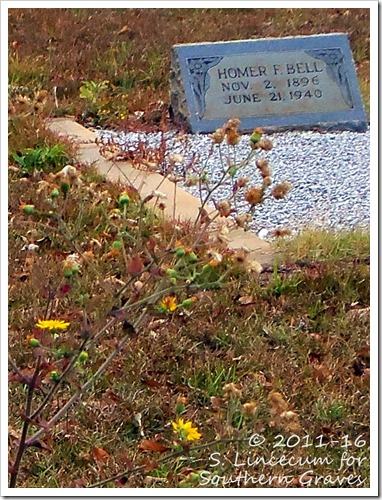 Homer F. Bell…miraculously escaped serious injury or possible death late Wednesday when he fell through a collapsed porch partly into a well.

This nugget was printed on page 1 of the 23 May 1940 Marietta Journal (Georgia).  Almost exactly one month later, another accident happened.  This time, Mr. Bell was not as lucky.  The same newspaper, issued 24 June 1940, stated Homer F. Bell died "of an accidental shotgun wound inflicted while cleaning his gun."  He was just 43.

The tragedy is echoed on Mr. Bell's death certificate. In the section devoted to cause of death is written:


We the sworn an Empaneled jury – according to Law find that Homer Franklin Bell came to his death from accidental gunshot wound.

Homer Bell was born  2 November 1896 in Canton, Georgia to Mr. and Mrs. C. F. Bell.  He received excellent marks in prep school and graduated from Mercer University.  His career was devoted to education.