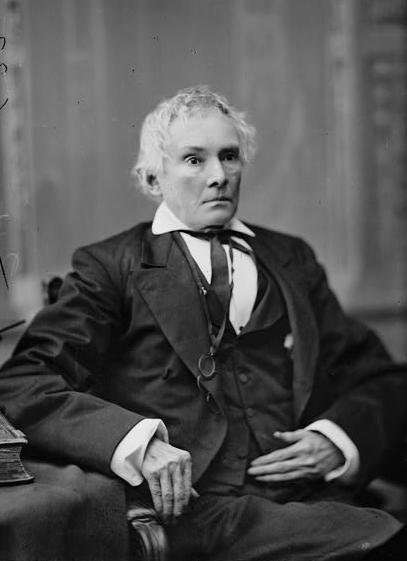 As mentioned in my previous post about the Cotting-Burke mausoleum at Oakland Cemetery in Atlanta, Georgia, there once was a temporary resident housed there.  That person was none other than former congressman, former vice-president of the Confederacy, and Georgia governor, Alexander Hamilton Stephens.

Alexander H. Stephens was born 11 February 1812 in Crawfordville, Georgia.  He is often described as small and sickly.  In fact, in 1843, at the age of 31, he only weighed 96 pounds.  But he had a boldness about him that could not be denied.  Famed Georgia historian, Lucian Lamar Knight, noted Mr. Stephens as being "game to the core."

I think it's safe to say Alexander Stephens was a much beloved citizen of Georgia.  Upon his death in March of 1883, it is estimated that approximately 25,000 people lined the roadways and followed his funeral procession to Oakland Cemetery.

Per Lucian Lamar Knight in Georgia's Landmarks, Memorials, and Legends:

The funeral of Mr. Stephens in Atlanta was an occasion long to be remembered.  It was held in the hall of the House of Representatives and was marked by the presence of General Toombs who, with tear-bedimmed eyes, and in a voice husky with emotion, bade farewell to his life-long friend…Following these sad obsequies, the body of the Great Commoner was placed temporarily in the Cotting vault, in Oakland Cemetery, at the State capital… 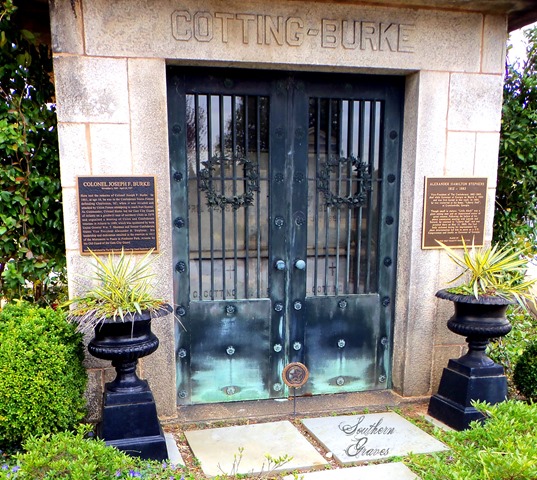 …but, on June 10, 1885, a committee of citizens from the town of Crawfordville brought the remains from Atlanta to Liberty Hall [A. H. Stephens' plantation home] for final interment in Georgia's soil.  The casket was accompanied by an escort of distinguished Georgians, including Governor Henry D. McDaniel, ex-Governor James S. Boynton, Captain Henry Jackson and Georgia's two United States Senators, Joseph E. Brown and Alfred H. Colquitt.  The body was met at the depot by an immense concourse of people, notwithstanding the dark clouds which overhung the afternoon sky.

Years later, a large monument –- "a statue of the wondrous little giant among statesmen" -- was placed at the final resting place of Alexander H. Stephens.  Among other sentiments inscribed on the monument, is this:

The defender of civil and religious liberty.
He coveted and took from the republic nothing save glory.
Non sibi, sed aliis.

The Latin phrase, Non sibi, sed aliis, translates to "Not for ourselves, but for others." This is the motto on the colonial seal of the state of Georgia. Stephens' home is now part of A. H. Stephens State Park.