Residents of the Cotting–Burke Mausoleum: David and Frances Cotting

The Cotting – Burke sarcophagus type mausoleum stands in Oakland Cemetery at Atlanta, Georgia.  It contains a couple of prominent individuals, and also temporarily housed another.  Today, I'd like to share the obituaries for David and Frances Cotting.  He was Secretary of State for Georgia, and she was a "leading social light." They both died of pneumonia, though 29 years apart. 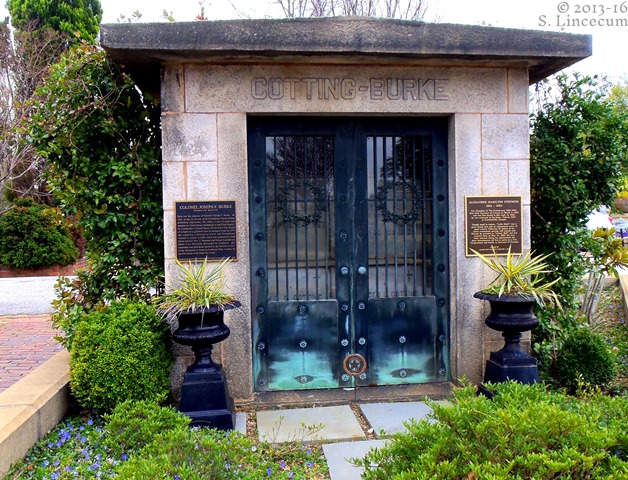 Death of David G. Cotting.
Mr. David G. Cotting, who has been suffering for sometime [sic] from a complication of disorders, died on Sunday night.  The immediate cause of his death was pneumonia.

Judge Cotting was born in Delham, Massachusetts, on the 28th of September, 1812, and was, therefore, over sixty years of age.

After graduating he devoted four years to the study of Greek and Latin.  He moved to Washington, Wilkes county, in this State, where, for a short while, he engaged in school teaching.  He was the editor for several years of the News and Planter, published in Washington, Ga.

In 1860 and 1861 Judge Cotting, while conceding the right of secession, contended that to secede was suicidal and against our best interests.  At the close of the war he advocted the holding of a convention by the white people, urging that the negroes would hole one and make a constitution inimical to us.  Most of the present constitution was, we are informed, framed by him.  In 1868 he was elected by the legislature Secretary of State.  Gov. Bullock, however, never consulted Judge Cotting on any of his measures, except when he was called as a member of the State Board of Education to decide upon text books.  The Judge Cotting voted against the books of Northern publishers which contained in them allusions to the "rebel Lee," "the rebel Johnson," etc.

Judge Cotting was a man of ripe scholarship and strong integrity of purpose.  During his life his honesty and uprightness were never questioned, for all who knew him had the fullest confidence in him.

He leaves behind him a stricken family who mourn his loss as indeed irreparable, and scores of his friends throughout the country who will revere his memory.  -- Atlanta Constitution 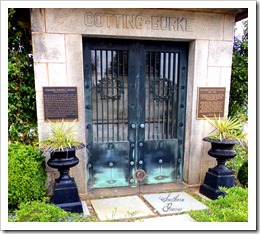 From the Atlanta Journal, 28th.
Mrs. Frances L. Cotting, wife of the late Judge David G. Cotting, Secretary of the state of Georgia from 1868 to 1873, died yesterday afternoon at the residence of her son-in-law, Captain J. F. Burke, 1 Peachtree Place.

Mrs. Cotting had been ill with pneumonia for seven days and this was the cause of her death.  She was 79 years of age.

Mrs. Cotting and her husband came to Atlanta from Washington, Ga., when the latter was elected secretary of state.  For many years she was one of the leading social lights of Atlanta, although of late years she had been unable to attend to her social duties on account of feeble health.  She was widely known, and has hundreds of friends over the state, who will regret to learn of her death.

Relatives and friends of Mrs. Cotting and Captain and Mrs. Burke are requested to attend the funeral, which will take place tomorrow afternoon at 2:30 o'clock at the residence of Captain and Mrs. Burke.  The following gentlemen are requested to meet to-morrow afternoon at 2:16 at the residence:  Ex-Governor R. B. Bullock, Judge L. E. Bleckley, B. B. Crew, L. E. O'Keefe, Judge George Hillyer, Dr. R. D. Spalding, General A. J. West, and Dr. W. L. Wilson.

...The interment will be at Oakland cemetery.

This mausoleum is featured in Atlanta's Oakland Cemetery: An Illustrated History and Guide, and it is listed in Resting Places: The Burial Sites of More Than 14,000 Famous Persons.