All Rome was there to meet her.  With the earliest glimmer of dawn the little city of the hills began to stir – but softly, like the tread of gentle snowflakes.  Long before the sun was up, every road was thronged with travelers from the neighboring farms and hamlets, while every train brought its burden of souls from the remoter towns and cities.  It was a day to be remembered by the youngest child when an aged man or woman, a day whose significance made it a rare forget-me-not in the year's calendar of events.  But, instead of the emblems of rejoicing, the symbols of grief were displayed on every hand…No sound of hammer or anvil smote the air.  Shops were closed…It was Mrs. Wilson's home-coming; and this vast assemblage of friends was here to welcome in silence a returning daughter of Georgia, one whose name was upon a nation's lips:  the beloved First Lady of the Land. [Georgia historian, Lucian Lamar Knight, 1914] Ellen Louise Axson Wilson died of Bright's disease on 6 August 1914 in the White House at Washington, D.C.  She was 54 years old, and left the President of the United States – just 17 months into his term – a widower.

Initially, the First Lady’s remains were rested on her White House bed. Four days after her death, a private funeral service was held for her in the East Room of the White House. Floral arrangements from around the world lined the entire east and west walls of the long room.

Her coffin was then escorted by her family on the train journey to her native Georgia, to the Rome cemetery [Myrtle Hill] where the late First Lady’s parents were buried.

For a full year after her burial, the grave site of the deceased First Lady remained unmarked with a headstone. Although this was not an unusual circumstance, her national status as a presidential spouse drew press attention to this fact. It was used as a point of public disapproval over the fact that her widowed husband had already begun publicly dating the woman who would become his second wife before a marker had been placed on the final resting place of his first wife.

When a marker was ordered (image at right) this was the inscription:

Sacred to the Memory of
Ellen Louise Axson
Beloved Wife of Woodrow Wilson
Born 15 May 1860 at Savannah, Georgia
Died 6 August 1914 at Washington, D.C.

A Traveller Between Life and Death
The Reason Firm · The Temperate Will
Endurance, Foresight, Strength and Skill
A Perfect Woman Nobly Planned
To Warn, To Comfort and Command
And Yet a Spirit Still · And Bright
With Something of Angelic Light

A full-page article in the 23 August 1914 Duluth News-Tribune (Minnesota) described scenes from the life of Mrs. Wilson, as well as her funeral.  Below are some excerpts (entire article may be viewed online at GenealogyBank).

A daughter of the South has been gathered into the arms of the South in her final resting place.  Ellen Axson Wilson, born in Savannah and there married, with most of her young girlhood passed in Rome of the same state, has been laid beside her father and mother in the old Myrtle Hill cemetery at Rome.  To the waiting thousands who watched her body being lowered into the grave she was not Mrs. Woodrow Wilson, wife of the nation's chief executive, but just Ellen, the little Ellen Louise whom they had known as a golden-haired girl at school.

Church Bells Tolled.
The president's special arrived in Rome at 2:30 o'clock in the afternoon of August 12, and a few minutes later the casket, covered with gray broadcloth and surmounted by a single wreath of flowers, was lifted from the funeral car by eight of Mrs. Wilson's cousins and borne to the hearse.  As the train steamed slowly into the station, church bells throughout the city were tolled solemnly…

…The procession then moved through black-draped-streets to the First Presbyterian church. 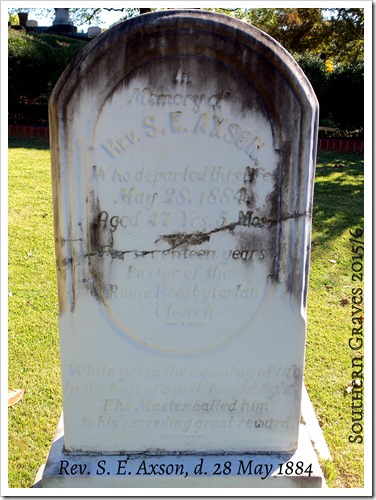 More than 800 relatives and friends of the Wilson and Axson families were already gathered in the quaint little church which Mrs. Wilson used to attend when her father, Rev. Edward S. Axson, was pastor there.  The church was draped in black, with entertwined [sic] wreaths of white flowers.  On one wall was a white marble tablet to the memory of Mrs. Wilson's father…

The President's Emotion.
The cortege was close to the cemetery when rain began to fall…A tent erected over the grave gave partial shelter to the little family group, but the thousands of people who came to witness the burial were without protection.

…The president stood with head bowed as the final rites were performed.  As he stood there with his daughters, Mr. Wilson made no effort to control his grief.  As the hushed voice of the preacher read the burial service, the president's form was visibly shaken by his strong emotion, and the tears streamed unchecked down his cheeks…When the final benediction was pronounced the president slowly returned to his carriage.  His eyes were as those of one dazed, but his step was firm and his face was stern and set.

After the casket was lowered to its final resting place and the grave filled, vast heaps of flowers, the tribute of the nation, were piled high over the tomb. 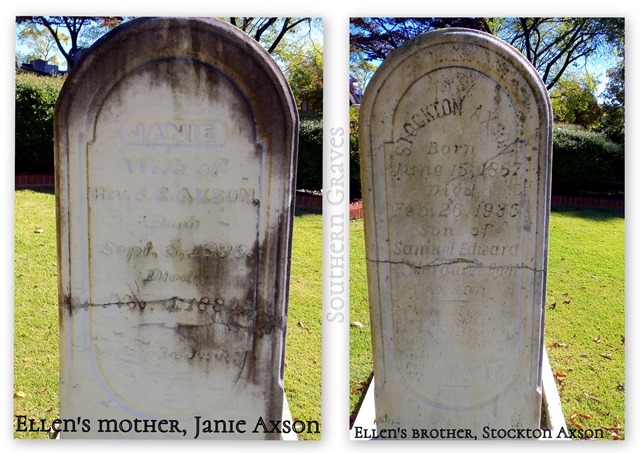 Ellen's grandfather was Isaac Stockton Keith Axson (1813-1891). He was the subject of a footnote found in "Dr. Bullie's" Notes: Reminiscences of Early Georgia and of Philadelphia and New Haven in the 1800s --


[Isaac Axson] graduated from the College of Charleston and Columbia Theological Seminary before becoming co-pastor of Midway Church [Liberty County, Georgia] in 1836. After serving four years as president of Greensboro Female College, Greensboro, South Carolina, he became pastor of the Independent Presbyterian Church, Savannah, and he remained there until his death... 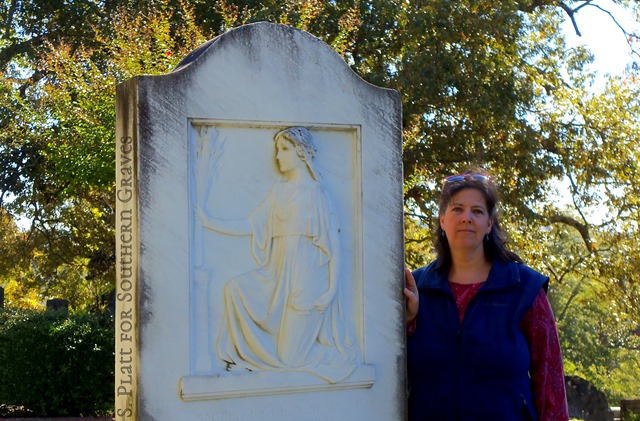