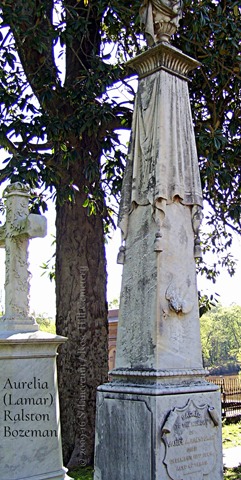 Aurelia L. was born 19 January 1825 in Georgia.  She was one of at least seven daughters born to Henry Graybill Lamar and Mary Ann Davis, and sister to Mary Gazaline Lamar Ellis. 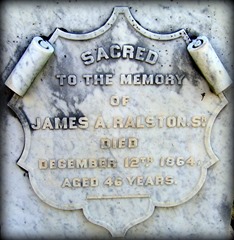 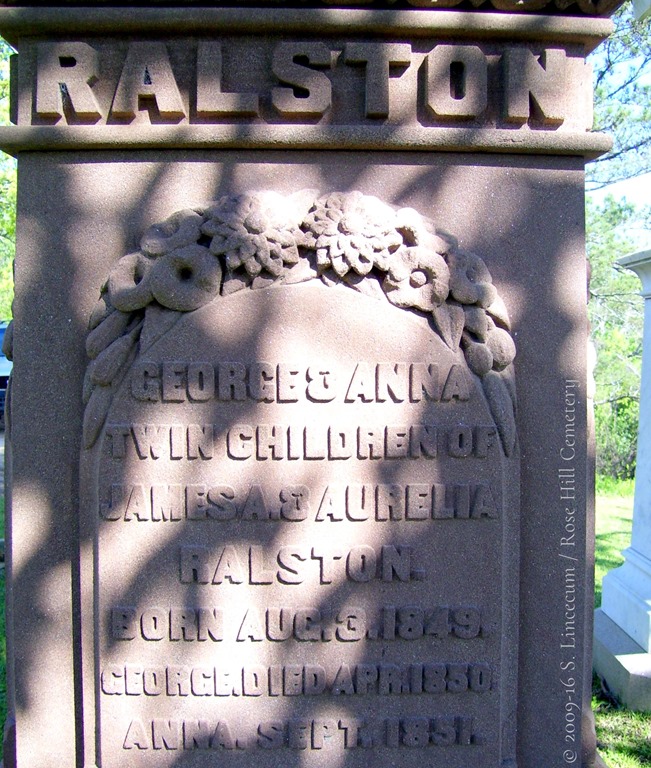 A little more about James A. Ralston, Sr.:  this was a wealthy man.  According to the 1850 Bibb County, Georgia Federal census, James held real estate valued at $50,000.  His occupation was listed as Speculator.  I dare say at least some of his real estate was inherited from his father, who died November 1842.  The 1860 Federal census for the same location shows James had real estate valued at $120,000, and a personal estate worth $60,000.  His occupation was listed as Planter, and the slave schedule shows he owned 30 individuals.

Furthermore, the Confederate Papers Relating to Citizens or Business Firms, 1861-65 database at Fold3 contains more than 70 images relating to rent payments made to James Ralston for the usage of buildings in downtown Macon by the Confederate Army for office space during the Civil War.

According to his tombstone in Rose Hill Cemetery (image of inscription above), James A. Ralston, Sr. died in December of 1864.  Just over two years later, on 7 February 1867, Mrs. Aurelia L. Ralston married Dr. Nathan Bozeman in Bibb County.  Their marriage service was conducted by a pastor of the Presbyterian Church.  Dr. Bozeman lost his first wife, Mary Frances Lamar, in May of 1861.

DEATH OF MRS. DR. BOZEMAN. -- Mrs. Aurelia Bozeman, wife of Dr. Nathan Bozeman, of Morristown, N.J., died suddenly at three o'clock yesterday morning, at her home in New Jersey.  Mr. Geo. B. Turpin received a dispatch early yesterday morning notifying him of the sad occurrence, and through him the many relatives and friends of the lady in Macon and elsewhere in Georgia.

Mrs. Bozeman was a daughter of Judge Henry G. Lamar, and, before she married Dr. Bozeman, was the widow of the late James Ralston of this city, and mother of James A. Ralston.  She was a sister to Mrs. N. C. Monroe, of Griffin, and of Mrs. W. L. and Mrs. Hayne Ellis, of this city. -- Telegraph & Messenger, 27th inst.

Aurelia Lamar Ralston Bozeman was laid to rest in the Holly Ridge section of Rose Hill Cemetery.  Her tombstone is topped with a large cross covered in ivy, her initials in the middle of the cross (pictured above).  At the base of the cross is an anchor, and there appears to be a crown on top of the cross. 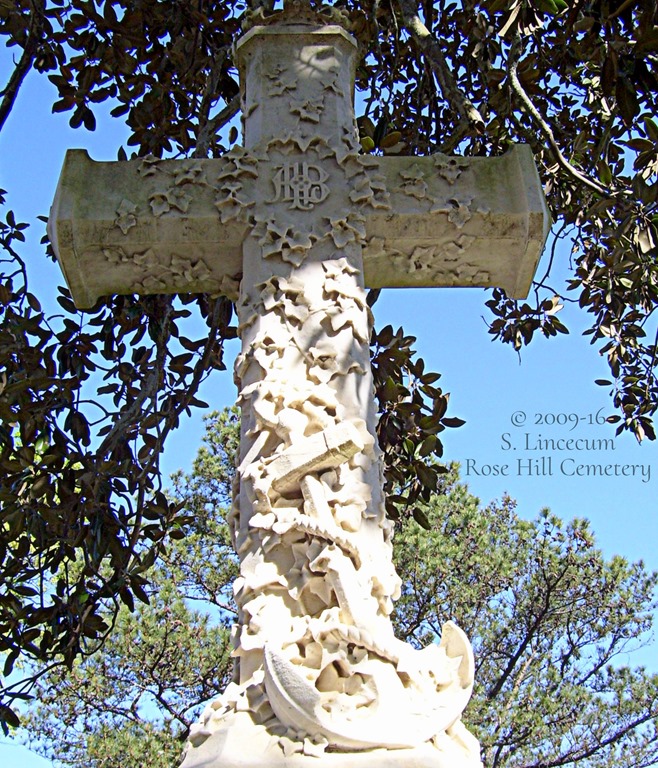 There is a lot of symbolism in play, here.  According to the go-to source for symbols in the cemetery, Stories in Stone: a Field Guide to Cemetery Symbolism and Iconography by Douglas Keister, here are some proposed meanings: