[This was originally posted at the Peachy Past blog. I thought it might be of interest to Southern Graves readers.]

Scarcely a vestige today survives in the way of a memorial to tell of the brief sojourn in this State of the pious Moravians.  But the early annals of Georgia are too fragrant with the memories of this sweet-spirited sect to justify any omission of them in this historical retrospect…The missionary activities of the Moravians among the Georgia Indians were successful in a marked degree; and, with little opposition from the red men of the forest, who learned to trust them with implicit confidence, they penetrated far into the Blue Ridge Mountains and established at Spring Place, in what is now Murray County, a mission which exerted a powerful influence among the native tribes, converting not a few chiefs and warriors, and continuing to flourish down to the final deportation of the Cherokees, in 1838…[Georgia historian, Lucian Lamar Knight, abt 1914]

A couple of informational markers were placed near the Moravian Missionary Cemetery at Springplace to further commemorate the mission site.  In 1931, a rough hewn stone block was set, with a plaque declaring, "the Moravian Mission to the Cherokee Indians was Erected Near this Spot…" Twenty-two years later the Georgia Historical Society again marked the area: 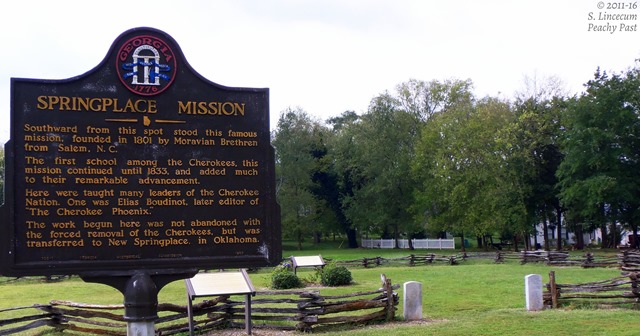 As the marker states, the mission was founded in 1801 "by Moravian Brethren from Salem, N.C." It's worth noting, this was not the first time the Moravians entered the state of Georgia.  A group first came in 1735, part of a "worldwide missionary campaign during the mid-eighteenth century to unite Christians and convert non-Christians." [New Georgia Encyclopedia] The settlement was at Savannah, but only lasted ten years.  Many say the Moravians left after being pressured to take up arms against Spain, but others suggest the disintegration resulted from internal strife.

Though there are records of members of the Cherokee Nation converting to the Moravian religion, the numbers were not great.  There seems to have been more of an interest in education on the part of the Natives.

The Springplace Moravian Cemetery, also known as "God's Acre," contains virtually no tombstones.  Nonetheless, it's quite moving to stand at its center and read these powerful words:

Surrounding you underneath are the graves of these nine people as well as those of several unknown individuals. 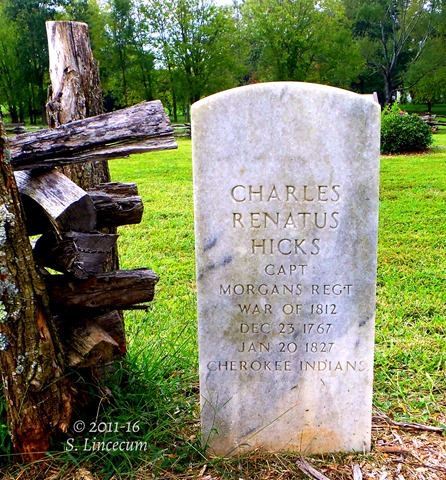 · Cherokee Principal Chief Charles R. Hicks (d. 20 January 1827) served as Deputy Chief of the Cherokee Nation from 1817-1827.  In 1827, when Principal Chief Pathkiller died, Hicks rose to the position of Principal Chief.  Less than two weeks later, Hicks was also dead.  He had attended the council at New Echota, even though he was ill.  On his way home, Principal Chief Hicks camped in the woods and took on a more serious cold due to dampness.

· Margaret "Peggy" Vann Crutchfield (d. 18 October 1820) was the niece of Principal Chief Charles R. Hicks.  She was married to James Vann at the time of his murder in 1809.  Peggy became the first convert in the Cherokee Nation on 13 August 1810.  She later married Vann's former overseer, Joseph Crutchfield.  From a Moravian Mission diary:  "Toward the evening there was a marked change for the worse in Peggy Vann's condition.  While singing about salvation her soul passed from us.  Not only was she enthusiastic for the Savior, but also a real example for good within her Nation.  Over one hundred came to attend the funeral service."

· Minerva Vann (d. 3 May 1833) was a child of Joseph Vann (son of James) and Jennie Springston. From a Moravian Mission diary:  "Toward noon I arrived at the Vann's.  They were in tears over the death of their five-month-old daughter, who died of whooping cough." 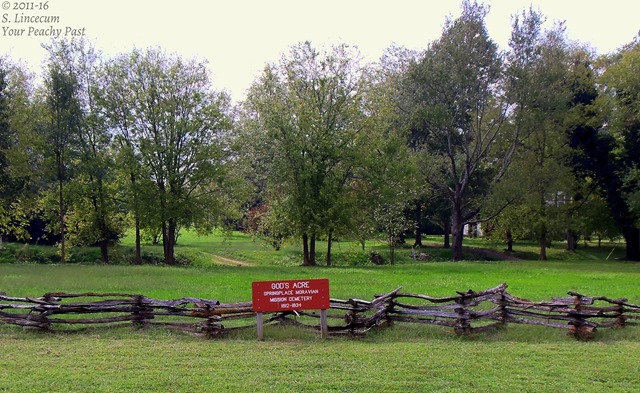 · Robert Howell (d. 31 January 1834), a brick mason from Virginia, was hired by James Vann to oversee the construction of the Chief Vann house in 1803-1804.  Two of Howell's brothers may also rest in God's Acre.

A couple of miles away from the Springplace Moravian Mission Cemetery is the Chief Vann house and plantation grounds. 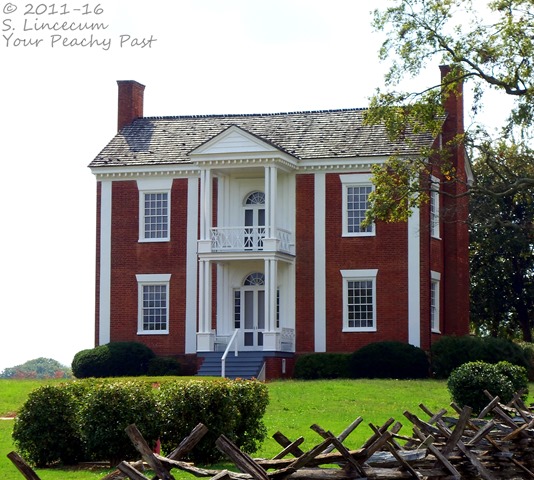 Dr. George R. Lamplugh wrote the following in his review of Tiya Miles' The House on Diamond Hill: A Cherokee Plantation Story:

Cherokee entrepreneur James Vann built the first house on Diamond Hill in 1801, a much cruder structure than the current one, and he invited missionaries from the Moravian Church in Salem, North Carolina, to found a Christian mission and school at the site, which they named Spring Place…

Vann lived in the house on Diamond Hill with his mother, Wali; several Cherokee wives, the most important of whom was Peggy Scott Vann; and his children.  James’ favorite son, Joseph (later known as “Rich Joe”) Vann, inherited the home, and his slaves built the famous brick manor house that still survives.

Fascinating history, to say the least. 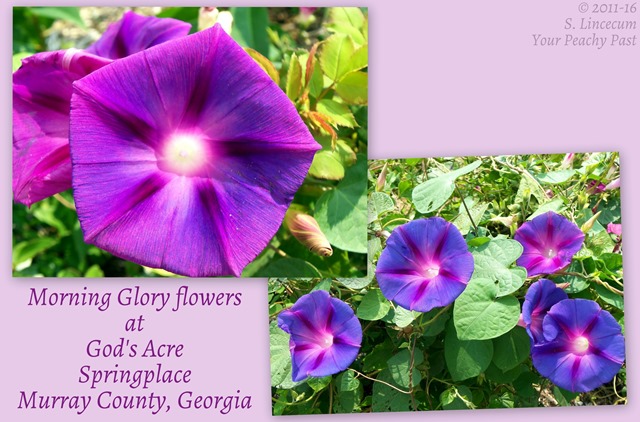