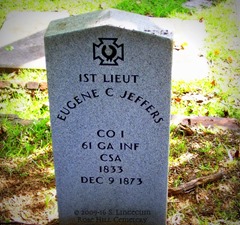 Eugene C. Jeffers was born about 1833 in Virginia to John E. and Eliza W. Jeffers.  Within a few years of Eugene's birth, the family moved to Georgia.  In 1848, when Eugene was a young adult, his father died at the age of 49.

Eugene Jeffers enlisted as a junior 2nd lieutenant in Company I of the 61st Georgia Infantry before October 1861.  He was promoted to 1st lieutenant 2 July 1863.  Muster rolls after that date and through April 1864 listed him as Present.  The 3 November 1864 roll, however, stated he was absent; "in hands of enemy."

Eugene was captured by the Union army as a Prisoner of War near Spottsylvania, Virginia in May of 1864.  He was received at Fort Delaware from Point Lookout, Maryland the next month.  By December of the same year, 1st Lieutenant Eugene Jeffers was listed on a roll of prisoners at Fort Pulaski off the coast of Georgia. 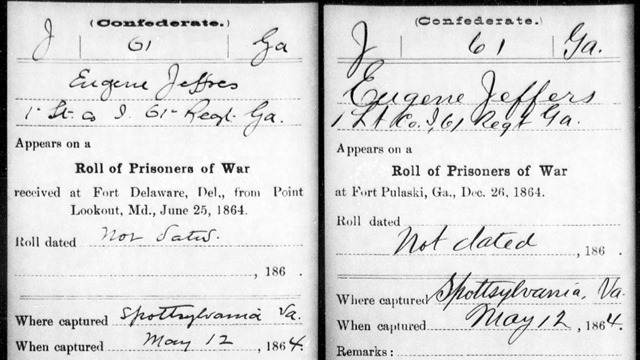 That last card from Fold3's Compiled Service Records of Confederate Soldiers Who Served in Organizations from the State of Georgia pushed me toward researching the names of the "Immortal 600." 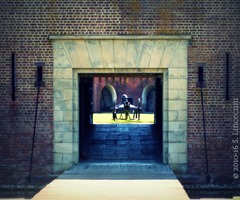 I visited Fort Pulaski six years ago, and the following is on an informational marker at the historic site:

The Immortal 600 were a group of Confederate officers held as prisoners of war at Fort Pulaski during the bitterly cold winter of 1864-1865.  They were moved here from Charleston where they had been placed in the line of artillery fire in retaliation for what was viewed as similar treatment of Union POW's.

The fallen officers endured many hardships, including a six-week diet of rancid cornmeal and pickles…From dysentery, chronic diarrhea, scurvy, and pneumonia, thirteen of the prisoners died while here at Fort Pulaski. 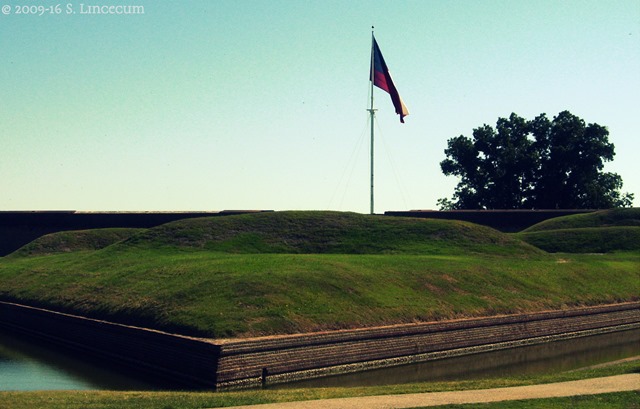 Wikipedia adds this:  "They are known as the 'Immortal Six Hundred' because they refused to take an oath of allegiance to the U.S. under duress." For a more complete account of this Civil War history, please read this article at HistoryNet.

And, finally, a list of the Immortal 600 – on which you can locate 1st Lieut. Eugene Jeffers – is here.

Eugene Jeffers survived his captivity, but his life may have been shortened because of it.  Eugene died 9 December 1873, about the age of just 40 years.  He was laid to rest near his parents at Rose Hill Cemetery.

Disclosure: The products above are affiliate links, which means I may receive a very small commission if you click a link and buy something. This helps to support my research projects and blogging activities, and also makes my two dogs' tails wag.  Hopefully, the purchase benefits you, too!  The price you pay will be no different than if you arrived at the same destination through any other link. My opinions are my own, to be sure. If I link to a product and say I like it -- I truly like it! Thanks for reading, following, and supporting this Southern Graves blog.

Darla M Sands said…
I am very moved by this, in particular because of the horrors I've learned about prisoner ships. War truly is hell. Thank you for sharing this.
November 12, 2016 at 12:07 AM

S. Lincecum said…
Atrocities that are almost impossible to comprehend. Thanks for visiting, Darla.
November 12, 2016 at 10:29 AM