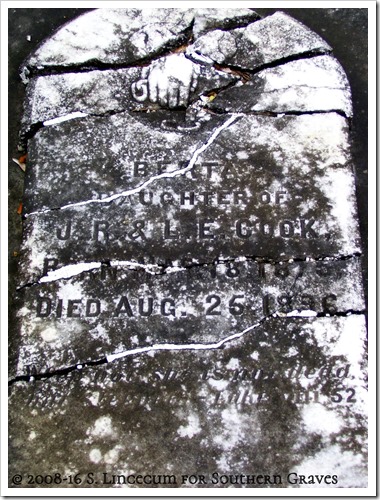 Berta Cook, daughter of Julian R. and Laura Elvira (Jones) Cook, was just 21 years old when she died.  Part of the epitaph on her tombstone is Weep not; she is not dead, but sleepeth.  "Not dead, but sleepeth" is not an uncommon inscription to find on a tombstone, but I rarely see the source attached.  Berta's stone provides it:  Luke VIII, 52.  Full verse from the KJV Bible:

And all wept, and bewailed her: but he said, Weep not; she is not dead, but sleepeth.

Though Berta died in the community of Bullard, Twiggs County, Georgia, larger papers -- like the Union-Recorder of Milledgeville and the Macon Telegraph of Bibb County -- carried news of her untimely death.

She Was a Bright Young Lady and Well Known in Macon:

News was received in the city yesterday announcing the death of Miss Berta Cook at Bullards, which sad event occurred yesterday morning at 6 o'clock, after a short illness.

The deceased was a daughter of Mr. J. R. Cook, a prominent planter residing at Bullards, and had relatives and friends in Macon to whom the news of her death was a sad blow.

Miss Cook was about 20 years of age and was loved by all who knew her.  Her Christian character and amiable disposition attracted all who came in contact with her, and doubly endeared her to the hearts of her parents.  Her friends extend to the bereaved family their deepest sympathies.

The funeral services will occur from the family residence this afternoon at 3 o'clock.

…She is a granddaughter of Mrs. E. A. Cook and a niece of Mr. W. A. Cook of this county.  Some years ago she attended the M. G. M. & A. College.  Last summer she visited her cousin, Miss Louise Wright, in this city, and won many friends by her charming manners and sweet disposition.  Her untimely death causes profound sorrow in a large circle of relatives and friends.

The funeral services were held at the old homestead at 3 o'clock Wednesday afternoon.

Berta was laid to rest at (what is now) Beech Springs Methodist Church Graveyard in Twiggs County, Georgia.  Her mother and brother Cornelius rest near her. 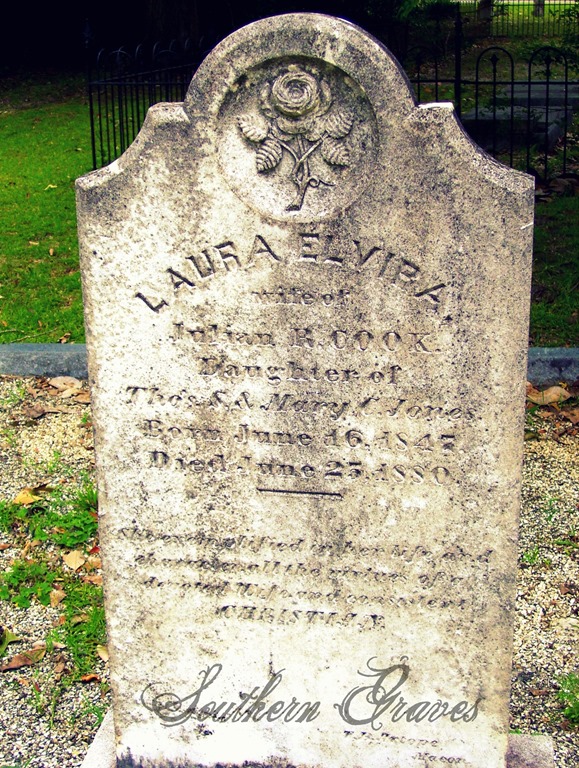 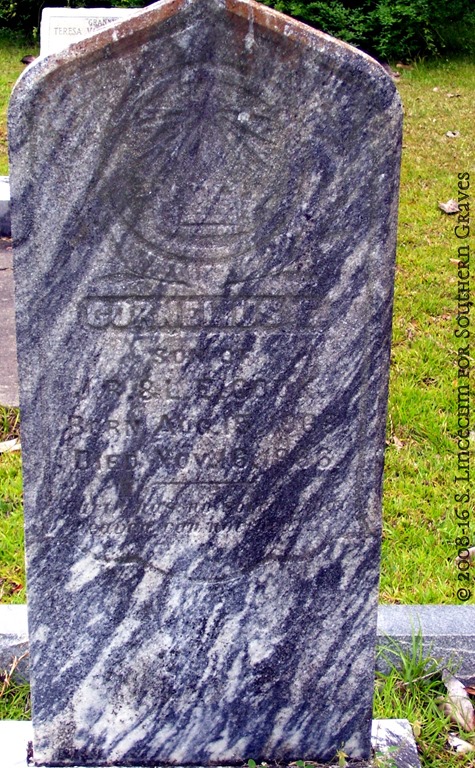