This mausoleum, located at Magnolia Cemetery in Charleston, South Carolina, houses members of the McDowall and Wragg families. 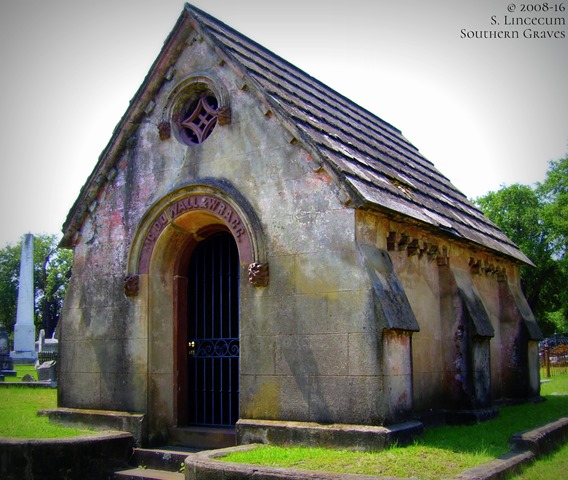 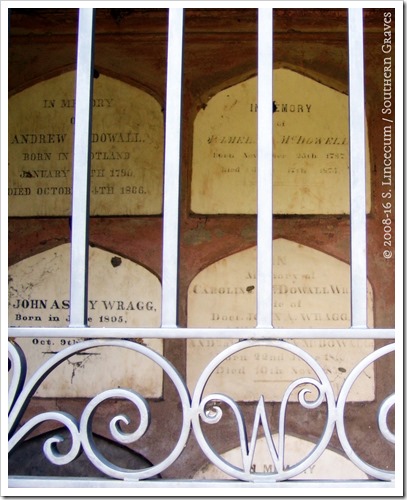 Obituary.
DEPARTED THIS LIFE, at Savannah, on Wednesday, 10th November 1858, in the forty-second year of her age, Mrs. CAROLINE WRAGG, wife of Dr. JOHN A. WRAGG, formerly of this city.

it is a beneficent constitution of nature, that the ordinary approach of death is manifested, by disease, old age, or some failure of human organization.  By this process, so to speak, not only the sufferer, but surviving friends are prepared for the catastrophy [sic]; yet if the shock be great, even thus measurably alleviated, how much more terrific must it be, when the inexorable messenger comes suddenly and unannounced to his victim, and enforces his mandate by dreadful tortures.

The subject of this notice was the eldest daughter of ANDREW MCDOWALL, Esq., of this city.  She was educated with much care.  Her intellect naturally good, was cultivated by study, and improved by travel; and to the substantial elements of instruction, were added those ornaments which adapted her to the enjoyment of refined society.  On her marriage, she removed to Savannah, where she resided to the time of her sad and melancholy death.

It was at the head of her large and interesting family, that the excellent gifts of her nature, and the advantages of her education, had full scope for their exercise.  Firm and affectionate, she sustained her husband in his professional and domestic duties, constantly and cheerfully.  Pious and sensible, she devoted herself to the training of her children; and blest with a remarkable sweetness of disposition, she endeared herself to a large circle of connections, by all of whom she was beloved and esteemed.  She believed that the object of a useful life was the performance of duty, and that the happiest execution of duty consisted in occupation.  So that even her accomplishments and taste, with admirable and uncommon tact and industry, were constantly appropriated to what was useful and valuable.  Her manners were equally interesting and engaging; and no person came within her influence, who did not experience the pleasures of her society.  There was even a melody in her voice, which imparted a peculiar charm to her conversation, and never failed to attract attention and admiration.

With such feelings, qualities and sentiments, it need not be said that she discharged with filial piety, every duty of love and affection to her venerated parents.  It is seldom that so many graces are united in a single character, yet she possessed them in unconscious simplicity and unaffectedness.

Caroline's husband, Dr. John Ashby Wragg, was born in June of 1805, and died 9th October 1870.  His final resting place is also within the walls of the McDowall & Wragg Mausoleum.