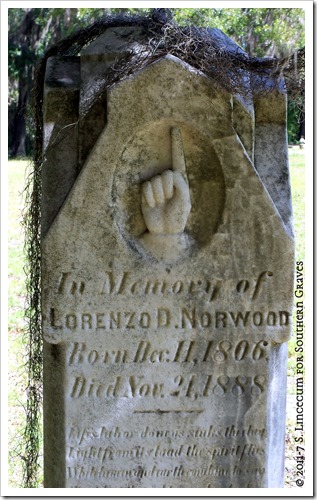 At about ten o'clock last Saturday night Mr. Lorenzo Dow Norwood died at his residence about 3 miles west of Perry.  The immediate cause of death was heart failure, the result of the gradually increasing infirmities of old age.

In many respects Mr. Norwood was a remarkable man.  He was born in Darlington District, South Carolina, on the 11th of December, 1806, consequently he would have been 82 years old on the 11th of next December.  He was married twice before he was 23 years old, having married Miss Cathrine A. McLaughlin, in March 1829.

Immediately after his last marriage, about 60 years ago, he and his wife became members of the Methodist church, and since that time neither of them has faltered in their devotions to the religion of Jesus Christ, which they held close in faith and practiced constantly.

Fifty-five years ago Mr. Norwood sold his landed property in South Carolina, and with his stock and personal effects moved to Georgia, making the journey in wagons and a lighter vehicle for himself and family.  He first settled in the 9th district of Houston county.  Six years later he purchased and moved onto the plantation of his last dwellin[g] place, having lived on the same lot of land during the last 50 years of his life, and 40 years in the house in which he died.

Mr. Norwood was a loving husband, a kind father, a true friend and an upright christian gentleman.  His life throughout was in strict accordance with his professions as a follower of Christ, and he always endeavered [sic] to do unto others as he would that they should do unto him.  His word was his bond, and no person ever resorted to the law to enforce the collection of a debt he owed.  He was never sued in a court of law, and never sued a claim.

During the last ten years of his life his infirmities were such as to prohibit personal attention to business, yet he was ever patient in his intercourse with all with whom he came in contact, and constant in his allegience [sic] to the Heavanly [sic] Father.

Four score years and two he lived here, and then the truly good man was called to that better home, eternal in the Heavens.  None who knew him can doubt this, and the sorrowing widow, sharer for 60 years of the joys [and] sorrows of the life upon earth, can draw comfort from the certainty of the anticipated reunion.

Mr. Norwood "is not dead but sleepeth," in accordance with the will of his Maker.

A host of friends heartily sympathise with the bereaved ones in their sorrow.